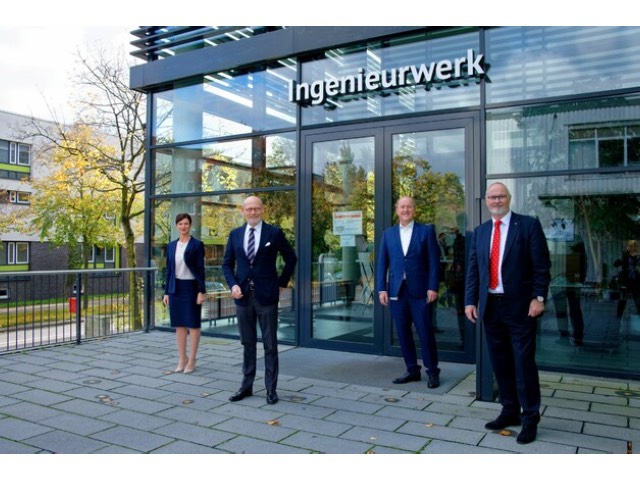 Jointly with partners, Port of Hamburg Marketing – HHM held the second Future Conference on Thursday, 29 October. Following the successful launch two years ago, due to the present situation this was a hybrid event, this time on the topic ‘Northern Germany as Hydrogen Hub’.

In his virtual welcome address Dr. Peter Tschentscher, First Mayor of the Free and Hanseatic City of Hamburg, stressed that hydrogen technology is a crucial factor for climate protection and of immense significance for our region’s economy: “In the North we possess the technological know-how, the science, the innovative companies, wind energy’s great potential, and the political will to build up a modern hydrogen infrastructure and business.”

Gripping themes and speakers
The keynote themes for the event concentrated on the opportunities for exploiting hydrogen and an expansion of hydrogen generation for the energy transition. The questions occupying all speakers to an equal extent were: What opportunities and added value potential for Hamburg Metropolitan Region and Northern Germany can be derived from hydrogen technology? And which conditions need to be fulfilled in order to be able to unlock such potentials?

The Future Conference tackled three groups of topics. In the first, Philip Hainbach, responsible for energy policy & government affairs at Enapter, Peter Lindlahr, CEO of hySOLUTIONS, Dr Stefan Rehm, Development Director at Hypion and Lars Zimmermann, Commercial Manager Hydrogen for Shell Deutschland Oil, discussed the topic of ‘hydrogen between hype and legitimate potential’. “It is no exaggeration to entertain great hopes of hydrogen,” asserted Dr Stefan Rehm. “But it must be sustainable hydrogen, and the political targets must be underpinned by firm, technically and economically practicable measures.” Philip Hainbach is convinced: “Germany has the opportunity of becoming established as the leading supplier of this technology.”

The second topic – “Hydrogen in ports, logistics and industry” – was discussed by Tim Brandt, Managing Director of Wind2Gas Energy, Dirk Burmeister, CEO of Region Heide development agency, Karsten Schönewald, CEO of Flotte Hamburg, and Detlev Wösten, Chief Innovation Officer and General Manager of H&R ChemPharm. Karsten Schönewald explained that Flotte Hamburg is pursuing a unique model in the operation of public-sector shipping, having been tasked by the Hamburg parliament with establishing a ‘green fleet’. “Having already closely addressed the reduction of atmospheric pollutants, we are now increasingly focussing on avoidance of CO2 emissions,” declared Schönewald. “The way there is via hydrogen technology.” Dirk Burmeister’s view is that still more intensive and coordinated cooperation between Schleswig-Holstein and Hamburg is required: “Alone, neither of the two regions offer the added value for hydrogen technology that they can provide together, with hydrogen production in Schleswig-Holstein and Hamburg’s consumers for it. In addition, it is absolutely essential that we become active in Brussels.”

Innovative, modern and dynamic – North German hydrogen strategy
With the third topic, ‘A dialogue on economic policy’, Schleswig-Holstein’s Minister of Economics, Dr. Bernd Buchholz, and his Hamburg colleague Michael Westhagemann rounded off the economic aspect of the discussions. In a video message, Buchholz emphasized the existing strong cooperation between Hamburg and Schleswig-Holstein: Almost precisely a year ago, the ministries of economics and transport of North Germany’s coastal states had hatched North Germany’s strategy on hydrogen, ‘to ensure that Northern Germany actually exploits the obvious opportunity.’ The goal is to push on with technological developments in this area, said Buchholz, who mentioned many practical examples of projects. North German ports would be playing an essential part in hydrogen imports.

Similarly, Michael Westhagemann, Hamburg’s  Senator for Economics, underlined the importance of the North German strategy on hydrogen, especially advocating cross-border cooperation with neighbouring countries too. He also demanded that “We become swifter in regulatory action, and the reduction in the Renewable Energies Act levy is not of itself sufficient here.”