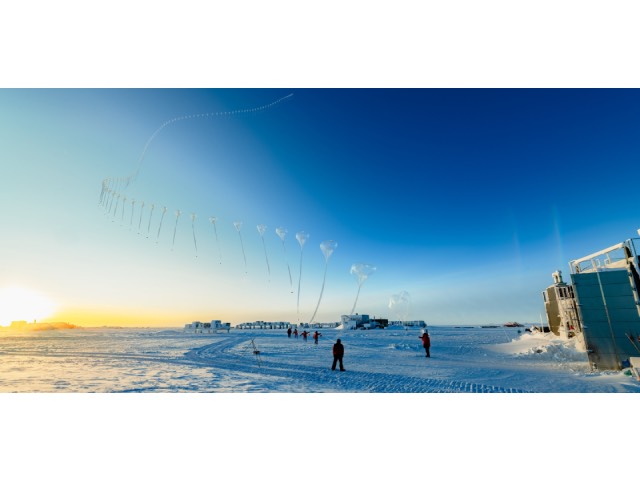 Persistent cold temperatures and strong circumpolar winds supported the formation of a large and deep Antarctic ozone hole that will persist into November, NOAA and NASA scientists reported today.

The ozone hole reached its peak size at about 9.6 million square miles (or 24.8 million square kilometers), roughly three times the area of the continental United States, on September 20. Observations revealed the nearly complete elimination of ozone in a four-mile-high column of the stratosphere over the South Pole.

This year will go down as having the 12th-largest ozone hole in 40 years of satellite records, with the 14th-lowest ozone readings in 33 years of balloon-borne instrumental measurements, the scientists said. Declining levels of ozone-depleting chemicals controlled by the Montreal Protocol prevented the hole from being as large as it would have been 20 years ago.

This visualization shows the size of the 2020 ozone hole over Antarctica as it reached its maximum extent of 9.6 million square miles between September 14 and September 20. (NOAA Climate.gov, based on NWS CPC data)
Download Image

“We have a long way to go, but that improvement made a big difference this year,” said Paul A. Newman, chief scientist for Earth Sciences at NASA’s Goddard Space Flight Center. “The hole would have been about a million square miles larger if there was still as much chlorine in the stratosphere as there was in 2000.”

What is ozone and why does it matter?

Ozone, composed of three oxygen atoms, is highly reactive with other chemicals. In the stratosphere, roughly 7 to 25 miles above Earth’s surface, the ozone layer acts like sunscreen, shielding the planet from ultraviolet radiation. Closer to Earth’s surface, ozone created by  photochemical reactions between the sun and pollution from vehicle emissions and other sources can form harmful smog in the lower atmosphere.

This year represented a dramatic turnabout from 2019, when warm temperatures in the stratosphere and a weak polar vortex limited ozone hole growth to 6.3 million square miles (16. 4 million square kilometers), the smallest on record.

How do NOAA and NASA measure ozone?

Bryan Johnson, a scientist with NOAA’s Global Monitoring Lab, said ozonesonde measurements recorded a low daily value of 104 Dobson units on October 1. In late October, ozone levels between 8 and 13 miles in altitude were still “about as close to zero as we can measure.” A Dobson unit is the standard measurement for the total amount of ozone in the atmosphere above a point on Earth’s surface.

The amount of ozone in the atmosphere is exceedingly small. Prior to the emergence of the ozone hole in the 1970s, the average amount of ozone above the South Pole in September and October ranged from 250 to 350 Dobson units. If 300 Dobson units of ozone were compressed into a layer of pure ozone, it would approximate the thickness of two pennies stacked one on top of the other.