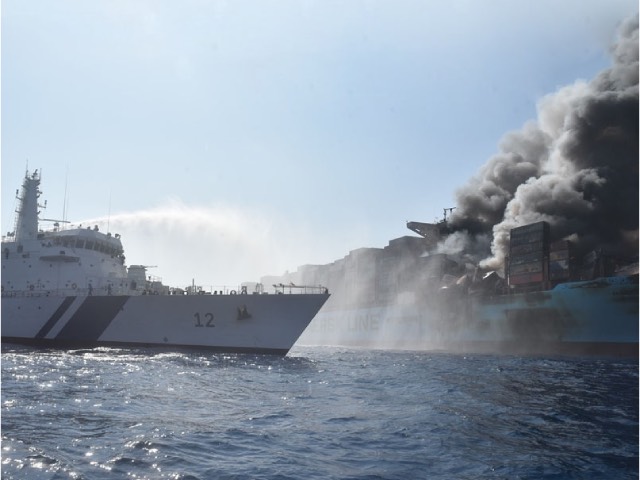 The proliferation of serious fires onboard container ships in recent years has shocked the shipping industry. Andrew Gray considers the causes and impact of such fires and the urgent efforts being made by a wide variety of stakeholders to solve this seemingly intractable problem.

Over the last decade there has been a 70% fall in ship total losses[1]. This has been widely credited to long term improvements in ship safety management and loss prevention programmes.  Counter to this trend, there has been a substantial increase over the last decade in the number of fires in containers carried onboard container and ro-ro ships.  One troubling statistic is that on average there is a fire onboard a container ship every week[2], with a major container fire occurring on average every 60 days[3]. Nine major container ship fires were reported in 2019[4]. By comparison, despite an overall fall in casualties in the first half of 2020, ten such incidents were reported[5].

This disturbing situation has been linked to both supply chain issues, including the widespread non-declaration and mis-declaration of dangerous goods cargoes, and inadequate fire-fighting systems onboard many of these vessels.

A 2020 study by the New York based National Cargo Bureau (NCB), supported by Maersk amongst others, revealed that of 500 containers inspected, 2.5% of DG containers imported to the USA were found to include mis-declared cargoes which represented a serious risk[8]. Another study found there may be about 150,000 volatile containers in the supply chain annually[9].

Undeclared or mis-declared cargoes which have become notorious for causing container fires include calcium hypochlorite (widely used as a bleaching agent), lithium batteries and charcoal.  Non-declaration or mis-declaration of cargoes is generally understood to arise from shippers’ attempts to pay lower freight or circumvent restrictions on the carriage of dangerous cargoes.

Dealing with fires onboard

There has also been widespread concern about the suitability of existing ships’ fire-fighting systems to deal with container fires. A 2017 study highlighted that systems originally developed for fighting fires in general cargo ship holds have proved to be unsuitable for container vessels[10].

Smoke detection and CO2 fire-extinguishing systems developed for large open holds may be completely ineffective within the confines of individual containers stowed beneath hatch-cover pontoons which are not gas-tight. There are calls for more sophisticated fire detection systems, utilising infrared cameras or thermal sensors installed both below deck and on deck.

While the containment of a fire within a limited number of containers remains the approved method of firefighting onboard a container ship, the equipment available is often unsuitable.    Many stakeholders warn that new technical solutions are needed to make this approach effective. These issues have only been magnified by the steadily increasing size of container ships from 10,000 TEU vessels in 2005 to ultra large container ships in excess of 20,000 TEU today.

Improvements have been made to new vessels constructed after 1 January 2016 under amended SOLAS regulation II-2/10, but there are calls for substantial changes to existing ships’ firefighting systems[11]. These include utilizing the ship’s structure to create more effective fire compartments while installing enhanced below deck and on deck water water-based systems to cool the ship’s superstructure and prevent fire spread.

On deck, monitors should be installed to create water curtains which can cool the maximum height and width of container stacks, particularly on the very much larger container ships now at sea[12]. Other innovative fire-fighting systems are being deployed such as HydroPen, which drills though the container door and then switches mode to spray water inside the container[13].

Without adequate ship’s firefighting systems, the ability of a container ship’s crew to respond to and contain a blaze is severely limited. Despite the undoubted bravery and professionalism of crews in tackling such fires, external assistance is invariably required. The ship may be a considerable distance from shore and, even when outside assistance arrives, such fires may take weeks to be brought under control. Meanwhile, a further concern is the pressure placed on the resources and expertise of the global salvage industry in dealing with the rising numbers of major container fires.

As a specialist shipping law firm, we are only too aware of the increasingly severe consequences of large container ships fires. Not only have such events resulted in the injury and death of many crew members and others over the years, but the environmental implications and financial losses continue to be significant.

With the increased size of container ships and their carrying capacity, a large container fire will severely impact the global marine insurance and P&I market with the sheer value of the property at risk, not to mention the GA effort of trying to collect security, vastly scaled up for the largest container ships. With present claims potentially running into tens or even hundreds of millions of US$, there is the fear that a total loss of a 20,000 TEU vessel and her cargo might exceed US$1 billion.

A considerable burden is also placed on the salvage industry and external firefighting services, with the significant challenge of fighting such fires due to the increased beam and stack heights of the larger container ships.

In addition, ports of refuge face the nightmare of how to deal with say 10,000 burned-out container shells and their cargo, many of which are not insured and abandoned. For example, exemplary support was recently given by the Singapore MPA and PSA in providing a port of refuge to MOL CHARISMA, the latest victim of this year’s major container fires.

The human and financial carnage inflicted by a single undeclared or mis-declared cargo in a badly stowed container onboard a modern container ship cannot therefore be overstated.

Major efforts are however underway to deal with this problem from both the supply chain side and in improving the firefighting systems onboard.

In an ideal world every cargo loaded in every container would be checked before shipping, but the cost of such an undertaking would be immense. At the same time, there are calls for more widespread spot checks by IMO member states and shipping lines to help identify undeclared or mis-declared cargoes.

Leading stakeholders are also working together to develop systems which reduce risk. The Cargo Incident Notification System (CINS) has over a number of years shared information on cargo related incidents and identified commodities which commonly cause problems during transportation[14].

Meanwhile, IUMI and other major stakeholders have co-sponsored a submission to the IMO Maritime Safety Committee’s 102nd session to amend SOLAS in respect of improved detection, protection and firefighting capabilities onboard container ships[16].

Further pressure may also need to be brought to bear on rogue shippers by building a world-wide consensus for those mis-declaring dangerous container cargoes to face criminal sanctions in their home country, with jail time for deliberately endangering life and the marine environment.

Our global team has offices in London, Newcastle, Singapore and Miami. We advise on all aspects of shipping and international trade, from handling major casualties to dry shipping litigation and ship finance. We have been involved in many significant ship and container fire cases over the years. Most recently, our Singapore office has acted in the MOL CHARISMA container ship fire which occurred off Sri Lanka in September of this year.

As a firm we share the serious concerns of our clients and the wider shipping industry about the proliferation in container ship fires.  We strongly support the numerous efforts being made by different sectors, from the supply chain side to shipboard improvements, to bring this unhappy chapter in shipping history to a close.