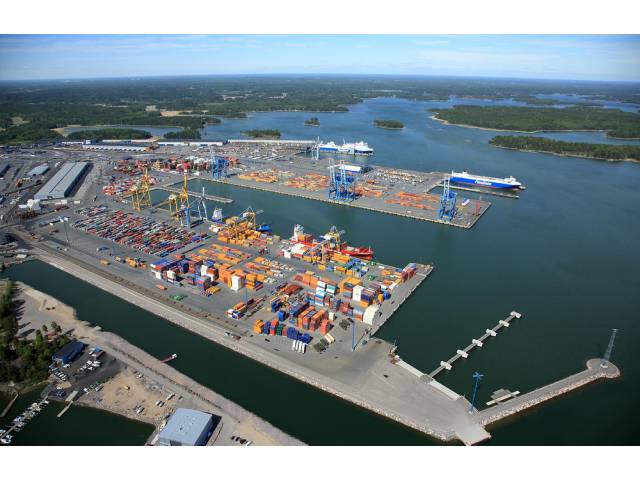 Three additional ship-to-shore cranes have been brought into operation at APM Terminals two joint venture terminals in Finland – Multi-Link Terminals in Kotka and Helsinki. The modernisation of the handling equipment will expand both terminals’ capacities and increase the competitiveness of their offering.

The equipment was purchased as part of Global Ports’ ongoing facility upgrade programme. Global Ports is a joint venture that combines the global expertise of APM Terminals (30.75%) with the local knowledge of Delo (30.75%), one of the largest private transportation and logistics holding companies in Russia. The terminals are a joint venture between Global Ports (75%) and CMA Terminals SAS (25%).

A new Konecranes ship-to-shore (STS) crane was brought into operation at Multi-Link Terminals Helsinki last month, replacing an older model. The new crane – measuring 40 metres in boom length, 31 metres in height and 70 tonnes in lifting capacity – is custom designed and developed specifically for the terminal.

Combining the functionality of an STS and a Rail Mounted Gantry (RMG) crane, it enables the accumulation of a shipload under the crane in advance, thereby increasing the speed of vessel handling. It also reduces overall operating costs, as it reduces the amount of equipment and personnel required. The new crane is also capable of handling vessels carrying containers 14 wide on deck.

The next step in Multi-Link Terminals’ STS fleet upgrade will be the modernisation of the existing Liebherr crane, when the height will be increased from 21 to 26.5 metres and boom length will be increased from 30 to 32.5 metres. The Liebherr crane upgrade is expected to be completed this month. The crane upgrade programme in Helsinki has been a part of the ‘Door2Lng’ project headed by Containerships – CMA CGM GmbH and co-financed by the European Union from the Connecting Europe Facility.

Multi-Link Terminals in Kotka received two Ansaldo STS cranes relocated from Hamina port, which complement the existing STS and mobile harbour crane (MHC). The cranes both have a capacity of 40 tonnes under the spreader and an outreach of 32 metres and 38 metres respectively, the latter being the largest crane in Kotka by outreach.