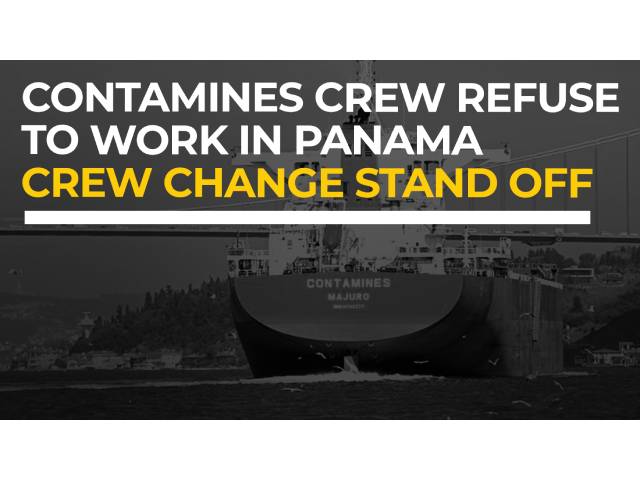 The crew of another ship have taken matters into their own hands in a new front in the unfolding crew change crisis.

Seafarers on the South Korean-owned bulk carrier ‘Contamines’ stood up and refused to work further as their ship came into berth in Panama in recent days. The seafarers adopted the action in order get repatriated after being trapped working aboard the Contamines for months beyond their original contracts, with some crew members approaching a year at sea.

The conflict came to a head earlier this week, but its origins began in early July, when the International Transport Workers’ Federation (ITF) was tipped off that at least some of the Contamines crew were working with expired contracts. Under the Maritime Labour Convention (MLC), a seafarer is entitled to be repatriated to their home country after their original contract expires, or they can choose to extend their contact up until a cumulative maximum length of 11 months on board. Ships are not allowed to operate with crew who have expired contracts. Often, expired contracts indicate a seafarer does not want to continue on the ship, but they are unable to get off.

During the crew change crisis, thousands of seafarers and even ships’ masters have been contacting the ITF Inspectorate and the federation’s national-level affiliates, saying they want to get off their vessel. More and more crew are refusing to extend contracts – they just want to go home.

But the message from the ITF is that its Inspectors can only help seafarers when crew identify themselves and put up their hands to request repatriation. Many crew remain fearful of retaliation from their employer, who can wield much power and intimidation for a crew still aboard. Seafarers are also worry about what speaking up might do to harm their future employment opportunities in the industry.

In the case of the Contamines, the ITF saw an opportunity in early July when the vessel was berthed in Tianjing, China. They noted that in a few weeks, in early August, it was due to be pass through the Panama Canal. Other seafarers have been able to repatriate via Panama, and so the ITF hoped these to get the Contamines’ tired and fatigued seafarers off there, and home to their families in Ukraine and Russia.

The ITF’s Latin America/Caribbean Network Coordinator, Juan Villalón, reached out to the ship’s crew. During his discussions with them, Villalón learnt that the crew’s contracts had been doubled since they first signed, and many were quickly approaching a year – over the legal maximum.

The crew also said that the ship’s South Korean owner had promised on a number of occasions to repatriate them. Every time the promises would come, but the ship kept sailing. Crew had been growing increasingly frustrated, and now even some of their salaries had stopped being paid.

Juan Villalón, who is based in Chile, contacted the ship’s manning company – ADK Maritime, of Singapore. Villalón requested their side of the story. But after more than a week, there was no response from the company. He fired off a second warning. This time, he copied in the ITF inspector based in Panama, Luis Fruto. Villalón asked his colleague to alert the Panamanian Port State Control (PSC) agency and be prepared to board the vessel if necessary. The many Maritime Labour Convention violations were grounds enough to have the sip arrested and detained – giving the crew a shot at freedom.

Separately, Villalón asked the crew if they were willing to stop working in the event things turned out bad with the company. The lack of communication from ADK Maritime was not an encouraging sign. He had to be sure the crew was ready for action – to stop working and leave the ship if safe to do so, upon arrival in Panama and take their shot.

Somehow, the company found out about the plans to have the Panamanian Maritime Authority arrest the ship for the MLC violations. Weighing up their choices, the company asked Villalón to have the ITF’s assistance to proactively get the crew home, rather than be served the ‘punishment’ of PSC action, which could keep the ship stalled for longer – and possible fines.

Taking the Singaporean company at their word, Inspector Fruto happily supplied instructions for crew repatriation via Panama, and set out the consequences for the firm should the country’s protocols not be followed closely.

ADK Maritime started to back-peddle on their commitments. First, they blamed the ITF. Then they said that there were no flights available by the time the vessel was through the Panama Canal and near the airport. The company was now saying that it would make its own plans to have the crew off in Bermuda, rather than Panama as agreed with the ITF and the crew themselves. The company’s ‘plan’ would delay repatriation by more than a week.

Villalón and Fruto were both shocked at the company’s behaviour.

“ADK Maritime decided to act in the worst way possible. They blamed, they blustered. But worst of all – they were trying to keep these human beings as slaves aboard their property. I was disgusted,” said Villalón.

At the same time, Villalón says, a captain from another vessel informed the ITF that the information the company was providing false information on the status of flights in the different countries. The company’s trickery was exposed when the flight fabrications were verified by Fruto.

“They were just playing with us. In the middle of a crisis we are all trying to get these men and women home – and this company was playing games with their lives,” says Fruto.

In that moment, Villalón and Fruto realised that the crew had to stand up and take action themselves.

On July 24, the crew advised the managers in the company that they were going to stop working upon arrival to Panama, as is their right under the MLC. Within a few days, the company had reacted and claimed they were working out flight options.

On July 31 the vessel finally arrived, and, of course, the Panamanian PSC and Inspector Fruto were waiting for the vessel.

With the Contamines South Korean-owned, the ship is actually flagged to the Marshall Islands. And so fairly soon after berthing, an inspector from e Marshall Islands registry came aboard first and talked to the crew. He was there to try to change their minds. Rather than holding the company accountable for extending contracts dangerously close to the 11-month international maximum, or investigating the unpaid wages – he pressured them to stay aboard. The agent told the seafarers that a fresh crew change and repatriation would be done at the ship’s next port of call, in Bermuda. After weeks of deception and false promises, the crew did not believe the Marshall Islands man.

“The crew point blank said they will not accept this. They will not take any more lies from the company and its friends. It has been too much now,” says Fruto of the crew’s resolve.

“This is an important example to other seafarers – if you stand up for yourself, we will stand with you.”

The next day the PSC, the Panamanian Maritime Authority, with the presence of Fruto, arrested the ship to prevent its scheduled transit of the Panama Canal. The seafarers we still on board and there was still no plan from the company to get them home.

In yet another deception, ADK Maritime fabricated documents showing they had bought flights for the crew the following week from Jamaica, saying the crew would now be departing from there. After some simple enquiries, the Panamanian Maritime Authority exposed the company’s latest lie, and arrested the Contamines until the crew were repatriated.

By 6 August, past the fabricated Jamaica flight dates, the PSC had evidence that missing salaries have been paid, but repatriation had still not yet occurred.

The next day four crew members signed off the Contamines as it sat in port, including the chief engineer (who is Panamanian) and the chief mate. The four were sent to a hotel, finally embarking on their voyage home. Further insulting them on their way out, the company only gave them breakfast – and not their wages. ADK Maritime had cut all salaries since the day the crew stopped working, despite the repatriation delay being almost entirely the fault of the company.

In the following days, the company’s replacement crew arrived. And then, finally, on August 11, the remainder crew who had been on board for almost a year, left the vessel and boarded their own flights home.

ADK Maritime continue to blame-shift and complain about how their crew members ended up in such a desperate situation.

Villalón and Fruto shake their heads.

“We are fighting to keep these seafarers alive. To reunite them with their wives, and husbands and children. It is extraordinary to have a company so brazen in their lies, their deceit, and now their arrogance. Have they no shame?” said Fruto.