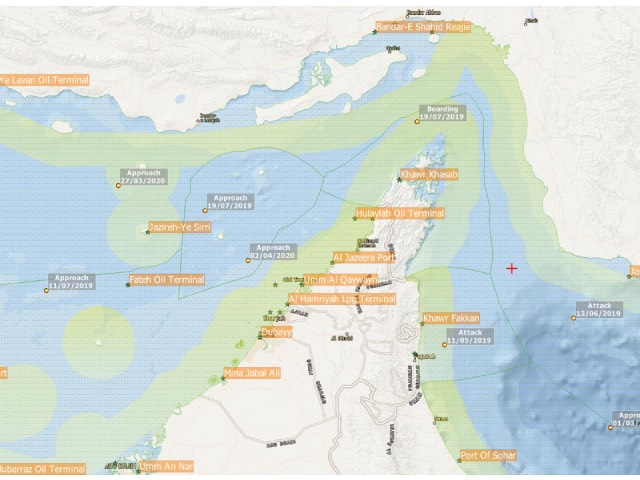 Dryad Global have received information that a Hong Kong flagged vessel was under attack at 25° 41’N 056°59’E – 50nm NE Fujairah / 47nm NW Iranian Port of Bandar e-Jask. The vessel is reported to have have been boarded by armed men whilst at anchor. The vessel was taken to Iranian waters and has since been released and is now under the control of the vessel master.

Dryad Global has since identified that the Hong Kong flagged, SC TAIPEI IMO 9175535, is highly likely to be the vessel of concern. The vessel is understood to have a crew of 22 personnel. All are believed to be Chinese nationals. The vessel was understood to be at anchor in an in-ballast condition and awaiting orders to approach al-Jubail in Saudi Arabia. At 12:48UTC the vessel was shown to be underway towards the Iranian coastline. At 14:28UTC the vessel was shown to be stationary at a position 4nm off Mogh-e Qanbareh-ye Kuh Mobarak.

Details regarding this event remain fluid and it is currently unclear whether the vessel is in distress or is being assisted by Iran in some way. Dryad Global assesses that her current location does not correspond with any known commercial activity in the region.

The key unknown variable in this potential incident is that the SC TAIPEI  is a Hong Kong-flagged vessel. While Beijing is not responsible for Hong Kong vessels, there is a realistic possibility that China would view the detention of a Hong Kong vessel as a proxy assault on its own sovereignty. At a time when China still buys Iranian oil, and Iran has few international friends, such a move would be highly irregular, and would not further Iran’s interests. The vessels flag has the potential to cast doubt on the veracity of the entire incident, yet it cannot nor should not be ruled out that Iran has conducted this operation, or that Iranian naval/IRGC units have acted in haste.

Dryad Global reported in recent weeks that Iran, due to the pressures of COVID-19, US-imposed sanctions and a collapsing oil price, faces a ‘perfect storm’ which could manifest as an existential threat to the regime. Even if Iran can weather current events, Tehran may decide that the current threat profile is existential in nature and may respond accordingly.

If the SC TAIPEI is verified as having been detained by elements of the Iranian military, then it may be the first move in an Iranian response to these pressures. Iran was unlikely to respond to its threats and strategic constraints in an impulsive or catastrophic way, at least not initially. A process of ramped escalation, which tests and probes international responses, is a likely trajectory of activity of which this may be the first. The detention of a vessel in the Strait of Hormuz would fit comfortably within previous Iranian intent and capability (as has been observed in the last 24 months) and would provide an opportune ‘opening salvo’ in an Iranian attempt to release the pressures the country currently faces.

Iran is also highly likely to be seeking to deflect internal focus away from COVID-19, and a potential Western response to a maritime incident would create ample ‘diplomatic noise’ to ease some of the pressure Tehran is facing. Finally, the resumption of vessel detentions sends a signal to the US that Iran still continues to object to sanctions, as well as signalling to Saudi Arabia, a key ally of the US in the region, that Iran is willing to take action to address the global oversupply of the oil market and will not sit idly by.