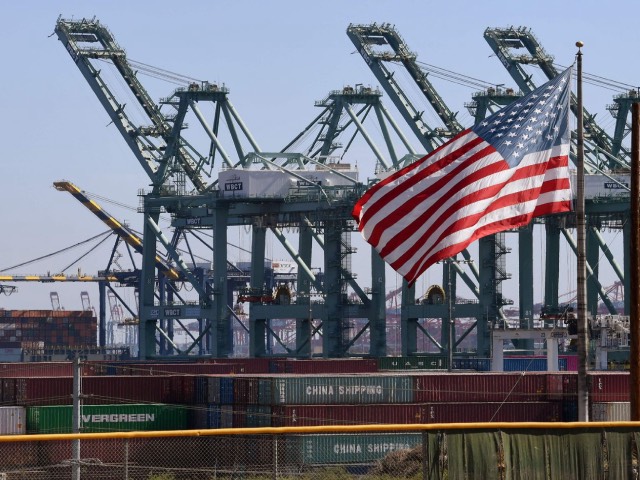 Before the coronavirus outbreak, shipping was already facing headwinds, including those caused by the trade war which has lowered volumes and changed trade patterns, both interesting developments which will continue into the future even as the world adjusts to the new reality.

US producers and manufacturers have found new buyers for the goods that have faced tariffs in China for over a year. According to data from the US Census Bureau, seaborne exports of US goods facing tariffs in China to the rest of the world have risen, but not enough to make up for lost volumes to China. In 2019, total US seaborne exports of the goods were down 2.6% compared to before the trade war started in 2017.

The US raised its exports of the goods to every region of the world except Europe and Asia, although the latter has seen higher imports when looking at the continent excluding China. The changing export patterns have hurt all the major shipping segments, with dry bulk and container shipping in particular seeing felling US exports of the tariffed goods.

Volume growth in total US seaborne exports slowed dramatically in 2019

Considering total US seaborne exports, rather than only those affected by Chinese tariffs, exports to China have fallen 42.7% in 2019, compared to 2017, totalling 59.6 million tonnes. However, in the same period, seaborne exports to the rest of the world have risen by 22.7% to reach 735 million tonnes, with particular strong growth in 2018 (+20.2%) driving this figure up. 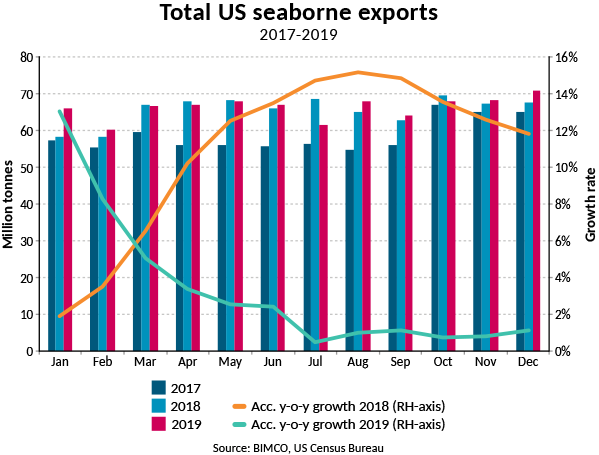 The strong growth in 2018 was due to the strong US economy that year rather than stockpiling ahead of tariffs. In 2019, growth in total seaborne exports slowed to 1.1% as the effects of the trade was and slowing global growth kicked in (see graph above).

“Slowing growth in US seaborne exports in 2019 is a consequence not only of the tariffs US exports now face when arriving in China, but also the harm caused to the US economy by the tariffs implemented on US imports from China, which have driven up the costs of many manufacturing parts and raw materials.

‘Phase One’ of the trade agreement may reverse some of the lost volumes in exports to China but it will not necessarily provide a large boost to US exports, as all tariffs on Chinese imports from the US remain in place as well as the majority of those on US imports from China. It also comes in the midst of the coronavirus outbreak which is affecting both demand for the goods in China and their production in the US, hampering higher exports.

Furthermore, the deeper underlying issues have yet to be addressed and any potential “Phase Two”, and tariff reductions, which it could bring, is not likely to be signed on this side of the 2020 US presidential election,” says Peter Sand.

Changes have affected the shipping segments in different ways

When comparing seaborne export volumes in 2019 with 2017, which gives a better picture of the trade war than comparing 2019 to 2018, it shows that all the major shipping segments have experienced drops in total volumes of exports of the tariffed goods (see chart below). 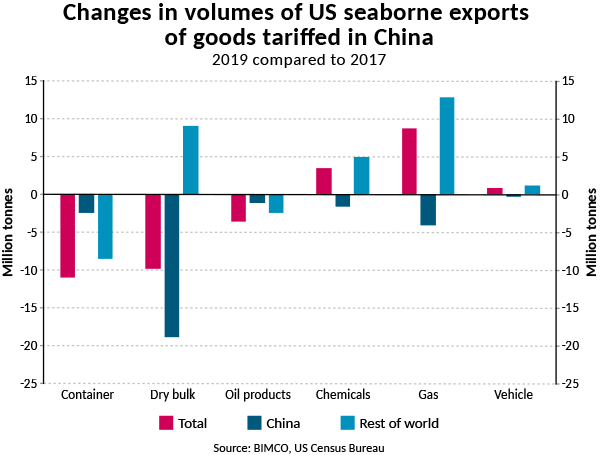 “Volumes of the tariffed goods transported in containers to China fell by 33.6%, and exports to the rest of the world fell by 8.7%. Combined, the US has lost 8.4 million tonnes of the containerized goods facing tariffs in China.

However, the damage caused by the fall in containerised exports from the US to China is limited, as volumes on the westbound transpacific lane are far less important than those in the capacity setting eastbound direction,” says Peter Sand.

For oil product tanker shipping, despite the high percentage drop in volumes to China since 2017 (-72.9%), the bigger problem for the shipping industry is the 1.8% drop in exports of the goods to the rest of the world. This is because exports to China accounted for only 1.1% of seaborne exports of the tariffed oil product goods in 2017, and the loss in volumes to China of 1.1 million tonnes from 2017 to 2019, is overshadowed by the 2.7 million tonne drop in exports of these goods to the rest of the world over the same period.

Dry bulk shipping is the segment with the largest volumes, as well as being the only one of the major shipping segments, in which there has been export growth to the world, excluding China. It has not been enough to make up for lost volumes to China, however.

In total, exports of dry bulk goods to China have fallen by 18.9 million tonnes, 9.1 million of which can be attributed to lost soya bean exports. The 5.6% increase in exports to the rest of the world, has added 9.1 million tonnes to the dry bulk market. The result is that, overall, only 9.8 million tonnes of exports of these goods have been lost. However, there has been a larger drop in tonne mile demand, because the countries importing more dry bulk goods from the US are closer to the US than China.

The goods which have faced tariffs in China for over a year total USD 113 billion worth of Chinese imports from the US. They were implemented over the course of 2018, as a retaliatory measure in response to each new set of tariffs the US announced it would impose on US imports from China.

They do not include the latest USD 75 billion list, which was originally implemented in September 2019, where tariffs were halved following the coronavirus outbreak. This list includes many of the of the goods which have already been affected by previous rounds and are now facing additional tariffs.

Even without China, the rest of Asia remains the largest market for the tariffed goods 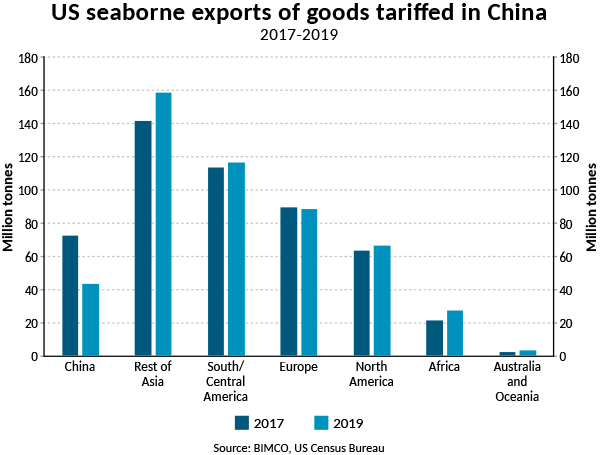 Outside of Asia, Europe is the only continent in which seaborne imports of the affected goods from the US in 2019 were lower than those in 2017, with a fall of 1.4 million tonnes (-1.5%). Europe is the third largest region the US exports these goods to by sea, with South/Central America coming in second place with imports of 116.8 million tonnes in 2019. Even without China, the rest of Asia takes the top spot, importing 159 million tonnes of the goods by sea in 2019.

“The trade war has caused significant disruption to established trade lanes. The US has managed to increased its exports of the goods to the rest of the world has limited the damage that would otherwise have been caused by the drop in volumes to China. However, as total seaborne exports have fallen, the shipping industry will still feel the lower volumes, and suffer from the disruption the trade war has caused to trade lanes.

The increased exports to other countries in the rest of Asia means the damage from falling exports to China has been limited, as the distances the goods are shipped across are comparable,” says Peter Sand.

Across all four of the Chinese retaliatory lists which have been in place for over a year, the share of US seaborne exports to China fell in 2019 compared to 2017. Exports to China have dropped, while exports to the rest of the world have risen.

The Chinese commitments to increase imports of some goods from the US, as detailed in ‘Phase One’ of the trade agreement between the US and China may see a boost to US exports of some of the goods. However, most of the tariffed goods have not been included in the agreement. Furthermore, new suppliers have already been found on one side and new buyers have been found on the other. It is therefore unlikely we will see a reversal in falling exports to China.

Added to this and greatly increasing uncertainty to the shipping market are the developments related to the coronavirus outbreak. Even as China slowly returns to work and builds its demand back up, with much of the rest of the world, including the US shutting down to prevent the spread of the virus, commitments under the Phase One Agreement need to be revised in order for the agreement to still make sense.

Find all of the latest from BIMCO on how the coronavirus is impacting shipping including market analysis as well as advice on legal and technical matters here.