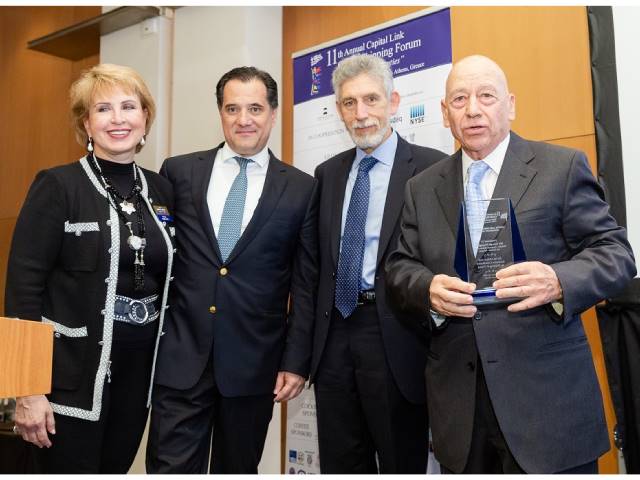 The “11th Annual Capital Link Greek Shipping Forum” was held in Athens on Thursday, February 20th, 2020, at the Hilton Athens Hotel, in cooperation with the New York Stock Exchange and Nasdaq.

The Lead Sponsor was Bank of Communications Financial Leasing Co., Ltd. The Forum was held with huge success attracting a record participation. The “2020 Capital Link Greek Shipping Leadership Award” was presented during the official luncheon of the Forum.

The pinnacle of the event was the presentation of the “2020 Capital Link Greek Shipping Leadership Award” received by the legendary Mr. George Procopiou, Founder – Dynacom Tankers Management, Sea Traders – Dynagas, in the context of a touching and modest ceremony. The award recognizes his long standing achievements and contribution to the Greek and Global Shipping Industry, his thought leadership and pioneering initiatives, as well as his contribution to Greece through his support of numerous cultural and philanthropic endeavors. With a captivating speech Mr. Procopiou moved the 570 participants who attended the Luncheon. Among them were his entire family, his friends and important executives and delegates from across the shipping industry, a literal Who-Is-Who of the Greek Shipping Community.

Mr. Adonis Georgiadis, Minister of Development & Investments of the Hellenic Republic, honored the forum with his presence and delivered the Introductory Remarks of the Official Award Luncheon.

The Minister opened his statement reminding the optimistic message he delivered to the “21st Annual Capital Link Invest in Greece” in New York last December concerning the prospects of the Greek Economy in 2020 and the years ahead.

“Now, having already entered in 2020 there are people who show their trust by wanting to invest their money in Greece. This is reflected in the 10-year bond rate which has dropped below 1%, in accordance with a stable economy and increased expectations for the future. Shipping Industry is a vital part of Greece’s economy, its tradition and its culture”, Mr. Georgiadis noted.

One of the many things discussed during the Minister’s encounter with the United Arab Emirates, in Athens, was the Greek Shipping and Shipyards.

The Minister believes that, while Onex’s investment in Syros shipyards has an upward course, the shipyard of Elefsina is also expected to have positive results. The US government has shown some interest too. The main goal for Elefsina shipyard is to follow the same model as the shipyard of Syros. Hence, Greek Shipowners will be able to choose a shipyard in Attica to refurbish, repair and maintain their vessels at very competitive prices and quality work.

The Minister also mentioned that the Greek Government is under the process of making sure that the delivery of those shipyards be shortly, not only to attract the Greek shipowners, but also to create job positions internally.

It is a common knowledge that every government that has been elected over the years in Greece has always supported the Maritime Industry and tried to avoid having problems.
Minister Georgiadis continued on reassuring that the present government is here to help with the bureaucracy and various public sector problems, in a national and European level and in compliance with the IMO. The economy along with the GDP is in a growing position showing confident predictions for the year 2020.
Finally the Minister closed his statement referring to a new bill which is planned to be implemented in March, in cooperation with the Ministry of Energy and Environment. The new bill will simplify all licensing for all environmental studies and generally everything related to investments in renewable energy. The Minister concluded that now is the time to invest in Greece.

Mr. Nicolas Bornozis, President – Capital Link, introduced Mr. George Procopiou – Founder, Dynacom Tankers Management, Sea Traders – Dynagas. In his remarks he stated that it is Capital Link’s privilege to pay its respects to Mr. Procopiou, for his leadership and his contribution to the shipping industry and to Greece. He is a very successful businessman, but beyond that, a visionary, a thought leader, an innovator, a patriot and devoted family man. Ever since founding Sea Traders, in 1974, he has built over 120 ships, while, among his many accomplishments, he is also responsible for the first ever LNG vessel to pass through the arctic sea route. He concluded referring to Mr. Procopiou as a strong-minded individual, an active philanthropist and a benefactor.’

Mr. George Procopiou – Founder, Dynacom Tankers Management, Sea Traders – Dynagas
In his speech he stated that being a private person, he was reluctant to accept this prestigious award but ultimately he is happy and grateful to accept it. Greece has been at the forefront of shipping for five thousand years, and this will not change. Its nucleus remains the family-owned enterprise. He thanked all shipping stakeholders, as well as the banks, for supporting him in order to transform his dreams into reality. He also thanked them for the support they extent to the Greek shipping community.