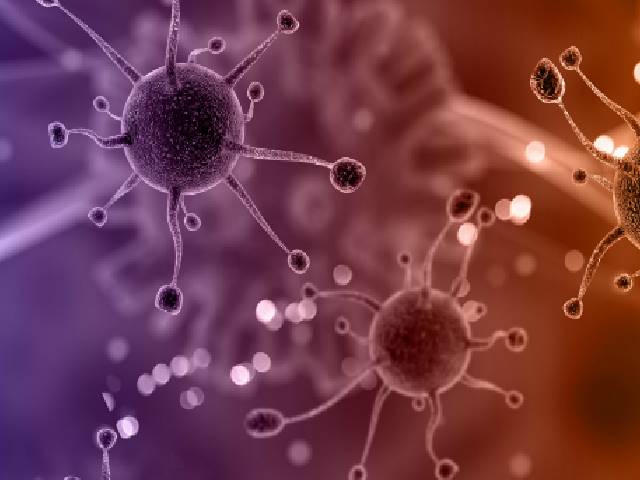 The short term impact of the coronavirus health crisis is a sharp hit to global container volumes and carrier earnings, but Drewry expects that the medium-term impact will be manageable provided the virus spread is contained.

Container shipping lines have learned the hard way to expect the unexpected. Whether it is trade wars, major port lock downs or new viruses, dealing with disruption has become the new normal. As facilitators of trade liner carriers are acutely exposed to events outside of their control, but there are limits to what they can do to mitigate their force. 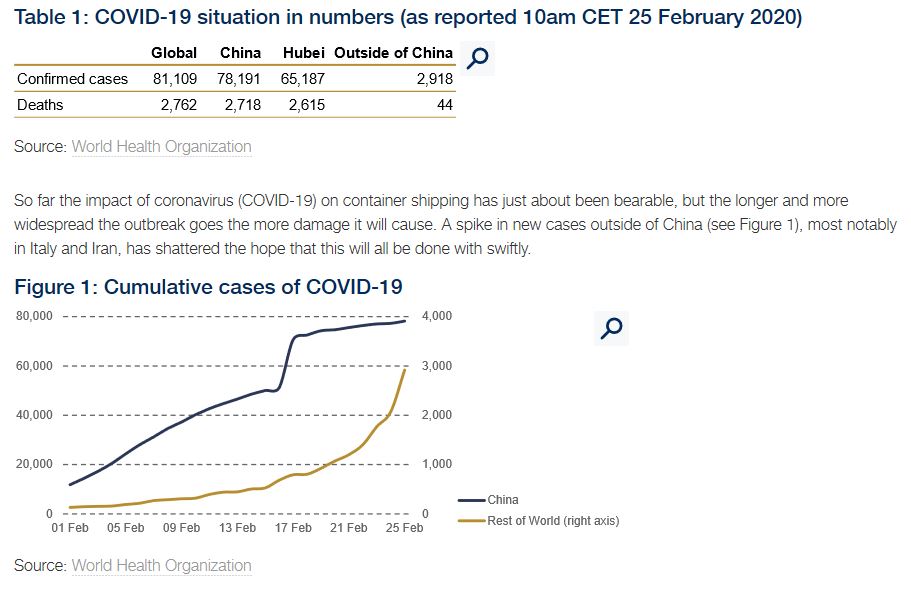 While it is preferable to avoid tabloid-esque doomsday predictions, so little is known about COVID-19 at this juncture, other than it is highly contagious, appears to have a much higher fatality rate than seasonal flu and currently has no vaccine, nobody can confidently predict the outcome. Authorities have the daunting challenge of protecting public safety without overly harming the economy that if it turns sour could lead to its own health risks, all the while trying to avoid panic. The main problem as it stands is a knowledge deficit that means countries don’t know what the appropriate response should be.

Container shipping is not as exposed to the coronavirus problems as the airline or tourism industries, but the short term impact is very apparent:

A 30% fall in container volumes in China (which accounts for 30% of global throughout) means a 30% x 30% = 9% reduction in global container volume, unless the shortfall is caught up later. But we should expect at least 2 months of global port volume falls.

The cancellation of 105 sailings per month represent a shortfall in revenue of roughly $1 billion (105 x 10,000teu x $1,000), of which a portion will be made up later via full ships and extra loaders, but the short term damage to carrier profits is large.

The uncertainty about how this story will develop means that there are numerous possible scenarios for the global economy and therefore container shipping, ranging from a fairly benign best-case where the world picks up speed quickly with very little after-effect, to a nightmarish worst-case that causes mass fatalities and cripples the global economy.

Obviously, Drewry is very much in the prediction game and has no choice but to take a position to inform our forecasts for the container market. In our view, there is enough historical evidence from recent outbreaks such as SARS, MERS and Ebola to suggest that COVID-19 can be contained fairly quickly, or at least become much better understood, and that on the balance of probability the outcome will not be devastating (see table below). 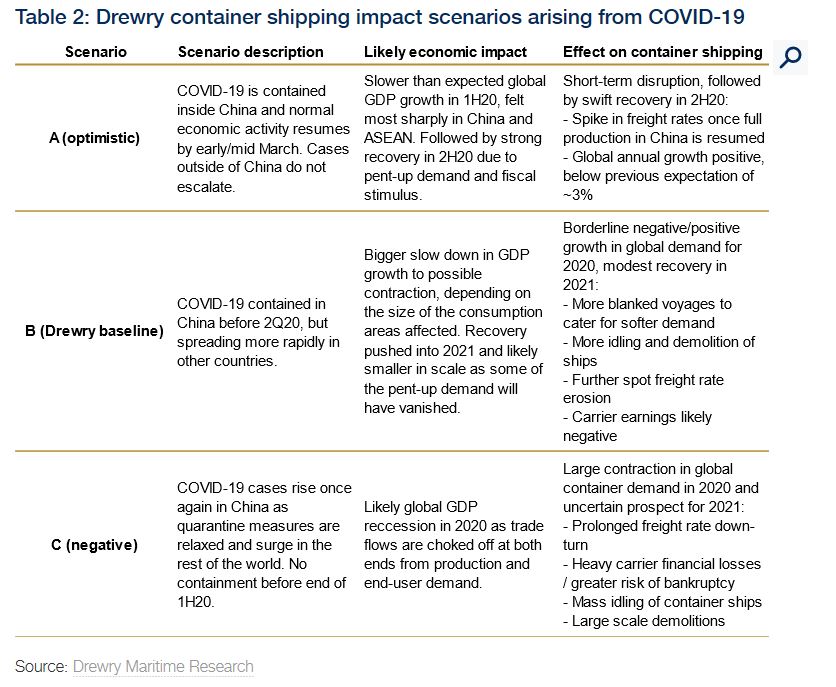 Cargo owners and shipping lines are desperate for a swift resolution that will see Chinese factories resume production and start churning out the goods and parts that grease the global supply chain. It is inevitable that world port throughput will suffer a large contraction in 1Q20, but the question is now whether we can expect a v-shaped recovery later this year or something else entirely?

Before the recent escalation in cases outside of China, economics forecasters were already downgrading GDP growth predictions to the tune of around 0.2 to 0.8 points. For example, the Economist Intelligence Unit (EIU) in a web-presentation on 12 February announced it was downgrading its baseline China outlook from 5.9% to 5.4%, which includes a strong rebound from 2Q20 as the Chinese government is expected to unleash a large fiscal stimulus program to kick-start the economy.

However, the rapidly evolving story means that most economic and trade forecasts will quickly become redundant and have to be re-calibrated. It is therefore perhaps more informative to think in terms of scenarios to get a broad idea of possible outcomes. With that in mind Drewry here presents three possible scenarios and the likely impact on container shipping with our current baseline forecast being Scenario B:

This was our original base forecast until very recently, but the sudden spreading of COVID-19 outside of China has caused us to re-think and adopt a less optimistic position. It remains as a possible scenario because the rise in new non-China cases might prove to be a statistical blip, although that is said more in hope than expectation. There is also a chance that COVID-19 will be contained once the weather turns warmer in the same manner as with seasonal flu.

Even in this most optimistic scenario it is hard to see how the container market can come out completely unscathed. While all of the Chinese ports, apart from Wuhan, have remained open, they are not operating at full capacity with staff shortages arising from travel restrictions and quarantine measures. Extended factory shutdowns have also limited movement of cargoes destined for those ports and when monthly port throughput data is finally released there will be a significant shortfall.

Even allowing for the expected stimulus package from the Chinese government that should spur greater box traffic from 2Q20 onwards it might not be sufficient to recover all of the lost ground from 1Q20 and we would anticipate making a slight downgrade to our annual global port throughput of approximately 3% made in December.

Nonetheless, ex-China freight rates will likely soar initially when cargo demand returns. How long they stay on that upwards trajectory will depend on how quickly capacity is reintroduced to the market.

On the Asia-North Europe route alone, there were 32 cancelled sailings in February 2020, up from 12 in February 2019, according to the new Cancelled Sailings Tracker in Drewry’s Sea & Air Shipper Insight.

Extra loaders will probably be necessary to deal with the backlog, but the market might not be so flush with spare capacity due to the fact that shutdowns in Chinese shipyards will delay some newbuild deliveries. Additionally, ship owners will want to get exhaust scrubber retrofits completed that couldn’t be done during the quarantine period. Any shortage of available capacity when cargo demand reasserts itself will give extra impetus to freight rates.

Whatever the outcome, COVID-19 has exposed the fragility of global supply chains that are overly dependent on a single manufacturing source. We suspect that shippers will look to broaden their sourcing options as a form of insurance.

Part of our rationale for choosing this as our baseline forecast is that the daily rate of confirmed cases appears to be slowing in China, which suggests the quarantine approach is working. This increases the likelihood of normal economic activity resuming in China before 2Q20, but as more cases pop up in its trading partners the problem could simply be shifting from one end of the supply chain to the other, especially If COVID-19 imbeds itself into the major consumption centres of Europe and North America.

Some countries will be better prepared than others to deal with an outbreak, but as the virus moves closer to Western cities the fear level will naturally rise and consumer confidence will take a hit. It remains to be seen if other nations will follow the lead of China by introducing strict quarantine measures (Italy already has in some locations) that could lead to similar supply chain blockages.

If the virus is indeed moving beyond China it seems likely that economic forecasts will be have to be trimmed again, the severity being dictated by how far the outbreak reaches and the ability of affected countries to contain it.

The longer they can keep it at bay will buy time to find an answer from the likes of the World Health Organization (WHO), who last year started researching unexpected pathogens that could cause public-health emergencies, the so-called “Disease X”. Following other recent outbreaks there is much greater collaboration nowadays that should expedite vaccine creation, although experts caution that it will take months for one to be clinically proven.

The more widespread and protracted the situation the less likely it is that the container market will be able to register growth this year, while a weakened global economy would hold less pent up demand, making for a softer recovery in 2021.

Under this scenario carriers would have little choice but to extend their capacity reduction plans, and at the extreme of this outcome to consider additional measures such as idling and heavier demolitions in addition to more blank sailings. We would anticipate that freight rates won’t benefit from the cargo rush bonanza of Scenario A and will instead continue to trend downwards until the situation eases, placing significant pressure on carrier earnings.

While the slowing trend of cases in China underpins our baseline forecast, we are hesitant to completely accept the official Chinese statistics at face value as they are widely disputed with some experts saying the number of cases could be 10 times higher. We are at a critical point now that the country is slowly getting back to work. This disaster scenario would see cases spike as people start to congregate and travel more freely together once again, leading to a quick return to the quarantine policy and further production outages.

If this is combined with a significant spreading of the virus outside China trade flows would be choked off at both the production and consumption ends with little opportunity for contingency plans.

It is a nightmare scenario that we would rather not have to consider, and while we think it is the least likely of the three options presented, it cannot be completely dismissed because of the unknown nature of the virus.

There would very likely follow a global economic recession with the potential to significantly reduce container flows. Under this scenario we anticipate a prolonged downturn for freight rates and an elevated risk of a carrier bankruptcy. To avoid such a prospect carriers would be forced to revisit the playbook from the financial crash of a decade before and undertake large scale capacity withdrawal in the form of mass idling and demolitions.

The container market looks set to suffer as a consequence of COVID-19 but there is currently too much uncertainty to confidently predict the outcome. Hopefully, more knowledge will be acquired soon that will enable countries to tread a path that protects both public health and the economy.