More and more ships, including container ships and cruise ships, are being built to run on liquefied natural gas (LNG), which emits approximately 25% less carbon dioxide (CO2) than conventional marine fuels in providing the same amount of propulsion power. However, LNG is mostly methane, a potent greenhouse gas (GHG) that traps 86 times more heat in the atmosphere than the same amount of CO2 over a 20-year time period. To better understand the full climate impacts of using LNG as a marine fuel, this study compares the life-cycle GHG emissions from LNG, including upstream emissions from leakage during extraction, processing, and transport and downstream emissions from combustion and unburned methane, to those of heavy fuel oil, very low sulfur fuel oil, and marine gas oil (MGO).

The authors use a representative life-cycle emission factor as well as the 100-year and 20-year global warming potentials (GWPs) for methane included in the Intergovernmental Panel on Climate Change’s Fifth Assessment Report. The 20-year GWP better reflects the need to reduce GHGs quickly, in order to meet the International Maritime Organization’s (IMO) climate goals, and the results show that when combined with a trend toward higher leakage, there is no climate benefit from using LNG, regardless of the engine technology.

Additionally, as illustrated in the figure below, the most popular LNG marine engine—low-pressure dual fuel (LPDF), medium-speed, four-stroke—is also the leakiest. Using LNG, this technology emitted 70% to 82% more life-cycle GHGs than MGO. The IMO has signaled that it will regulate GHGs under its initial GHG strategy and continued investment in LNG infrastructure on ships and on shore risks making it harder to transition to zero-emission vessels in the future. Investments should instead be focused on technologies that reduce total life-cycle GHG emissions, including energy-saving technologies, wind-assisted propulsion, zero-emission fuels, batteries, and fuel cells. 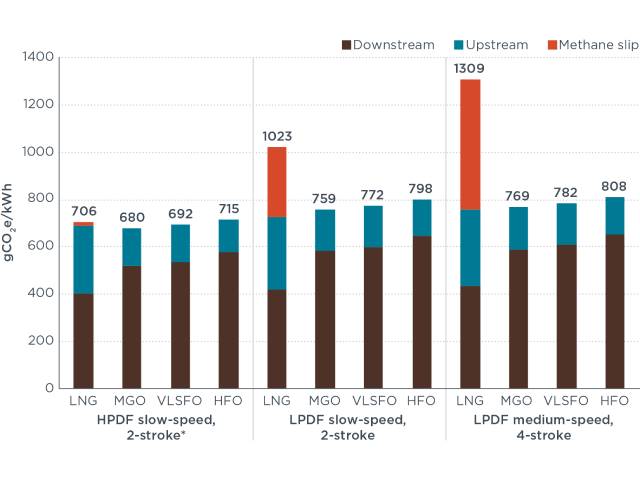