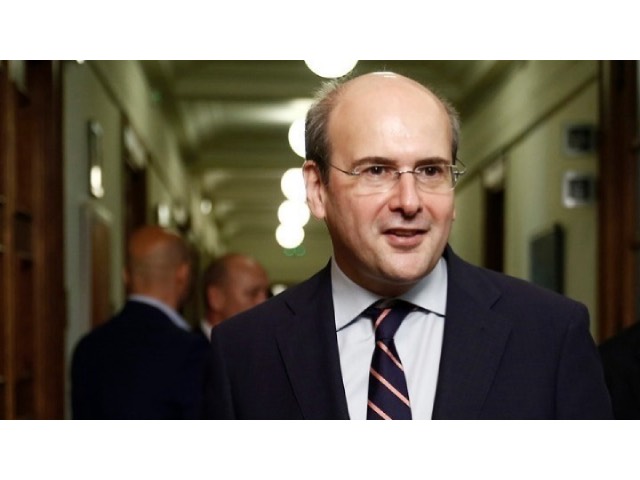 The EastMed pipeline is a “plan of peace and cooperation, a plan that uses energy as a catalyst for positive developments on an economic level, for the economic growth of the broader region of the southeast Mediterranean,” Environment and Energy Minister Kostis Hatzidakis said in an interview with the Athens-Macedonian News Agency (ANA) radio station ‘Praktoreio 104.9 FM’ on Friday.
Talking about the signature of the intergovernmental agreement for the pipeline by Greece, Cyprus and Israel on Thursday and its significance for Greece and the surrounding region, he noted that, apart from the obvious message that the three countries were coming closer, “it also boosts energy security in Europe because it increases the supply sources, the alternative solutions in relation to natural gas.”
In addition, he added, “it sends a message of determination to Turkey concerning the defence of the sovereign rights of the countries that signed the agreement.”
“Turkey sped to doubt the signatures and the agreement and therefore this aspect must be stressed; the pipeline is not directed against anyone, on the contrary it is a plan that turns towards peace and progress in this area, but because there is this sour note from Turkey’s side, I am obliged to stress this,” the minister said.
Greece was acting in cooperation with other countries, striving to strengthen the country’s international alliances and to ensure that Greek positions were understood, Hatzidakis noted. “I think that this is being achieved. The prime minister is heading out himself next week to go to America, the foreign minister, the defence minister, we at the energy ministry, each of us is moving and doing their part,” he said, adding that Greece wants to coexist peacefully with all sides but cannot simply stand by and watch “outdated approaches on the part of Turkey, approaches that not only harm stability in the surrounding region but also harm Turkey itself, in my opinion, and the interests of the Turkish people.”
Regarding the future participation of Italy in the project, the minister said that this would be significant “since it would be preferable for the gas to arrive naturally within Italy itself and in Central Europe, therefore Italy is a partner of great importance.”
He noted that Italy has participated in the discussions and the processes so far, supports the project on a European Union level with the preliminary studies that have been funded and by the description of the project as one of common interest.
The minister also highlighted the expressions of support from the United States for the EastMed pipeline, through statements made by the U.S. State Department, U.S. Ambassador in Athens Geoffrey Pyatt and at the “3+1” Greece-Cyprus-Israel summit attended by U.S. Assistant Secretary of State for Energy Resources Frank Fannon, who underlined that the U.S. supports the project, in the same way as the EU.
On the technical difficulties, he noted that all such projects were technically complex and the important thing was the support of the the project by three countries, as well as the EU, the U.S. and major energy firms, and the existence of natural gas deposits in Israel and Cyprus that must be delivered to Europe.
Hatzidakis also spoke about the ministry’s “green agenda”, starting with the phasing out of lignite by 2028 and the connection of the islands with the mainland power grid, as well as improving the energy efficiency of buildings, electromobility, a ban of disposable plastic and reforestation, among others.
“We have an ambitious green agenda that is supplemented by the policy we must have for a comprehensive management of waste,” he said.