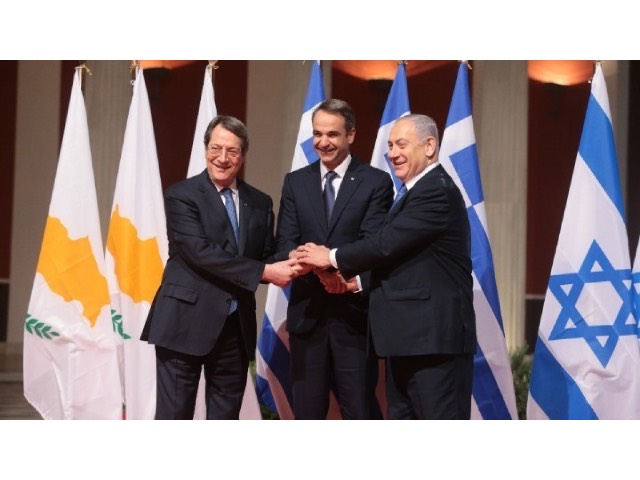 The construction of the EastMed will comprise one of the largest pipelines of natural gas and has a financial, development and geostrategic aspect, Greek Prime Minister Kyriakos Mitsotakis said today, during a joint press conference with the leaders of Cyprus and Israel after the signature of a trilateral agreement. Beyond its obvious benefits for countries, it is also a contributing factor to peace and geostrategic stability in the area, Mitsotakis said at Zappeion Hall in Athens. The pipeline will upgrade the geostrategic role of Greece and Cyprus, and turn Greece into a critical energy hub in the region’s supply. Mitsotakis joined the event with Cyprus President Nicos Anastasiades and Israeli Prime Minister Benjamin Netanyahu, as Energy Ministers Kostis Hatzidakis of Greece, Yuval Steinitz of Israel and Georgios Lakkotrypis of Cyprus signed the agreement.

The energy ministers of Greece, Cyprus and Israel, reiterated their firm intent to proceed with the project, regardless of any reactions. They stressed that the project was not aimed against any country, and fully complies with international law. Greece’s support for the underwater electricity connection between Crete, Cyprus and Israel was also discussed. Greece supports the project also as a means of ending Cyprus’ energy isolation, while sources also reported that this project is still looking for funding. Greece, they said, believes the issue of compatibility with the Greek power grid will be resolved.
Ministers Kostis Hatzidakis, Israeli Energy Minister Yuval Steinitz and Cyprus’ Energy Minister Georgios Lakkotrypis also discussed particulars of the upcoming EastMed Gas Forum, including the participation of seven countries and held in Cairo in January 7.

“The EastMed natural gas pipeline could be a dream for some and a nightmare for others, but today the foundations are laid for its implementation,” Greek Environment and Energy Minister Kostis Hatzidakis said on Thursday, during a ceremony for the signing of a Letter of Intent between DEPA (the Public Gas Corporation of Greece) and Energean Oil & Gas for the supply of 2.0 billion cubic meters of gas annually through the EastMed pipeline.
The letter of intent was signed a few hours before the official signing of an Intergovernmental Agreement for the support of the pipeline in the presence of Greek Prime Minister Kyriakos Mitsotakis, Israeli Prime Minister Benjamin Netanyahu and the President of the Cyprus Republic Nicos Anastasiades.

Commenting on the letter of intent, the Greek minister said the pipeline is the best strategic choice to transport natural gas from the southeast Mediterranean and that’s why it has the strong support of the European Union. He noted that with the participation of Italy, the project will take its final form as the most dynamic choice to bolster energy security in the European Union from eastern Mediterranean reserves. He noted that the agreement to be signed in the Zappeion Hall later this afternoon was not directed against any country. “It is directed in support of peace and cooperation in east Mediterranean. It is a coalition of forces for peace and progress in the wider region. We see energy not as a cause of conflict but as a catalyst of peaceful co-existence of all countries and peoples in the wider region,” Hatzidakis said.

The EastMed pipeline is expected to have an initial transport capacity of 10 billion cubic meters of gas annually, from the fields in the east Mediterranean to Europe via Crete and central Greece. Hatzidakis said that the remaining 8.0 billion cubic metres (beyond the 2.0 billion envisaged in the agreement between DEPA and Energean) could be found in other fields.

Constantinos Xifaras, DEPA’s CEO, said the agreement is helping the company to become more international and announced that the final investment decision will be reached in two years. He underlined that according to preliminary surveys the project is sustainable, with lower costs, adding that the project will help both the wider region and Greece’s role in east Mediterranean and the Balkans.
Mathios Rigas, Energean’s CEO, said that the project create a way-out for natural gas in east Mediterranean that raises supply and competition and expressed the hope for successful outcome in drillings to be made in Greece. The EastMed pipeline will have a length of approximately 1,900 km.