Cyprus Shipping News
Home World Tanker ISTANBUL was attacked while underway by one high-speed craft with 9... 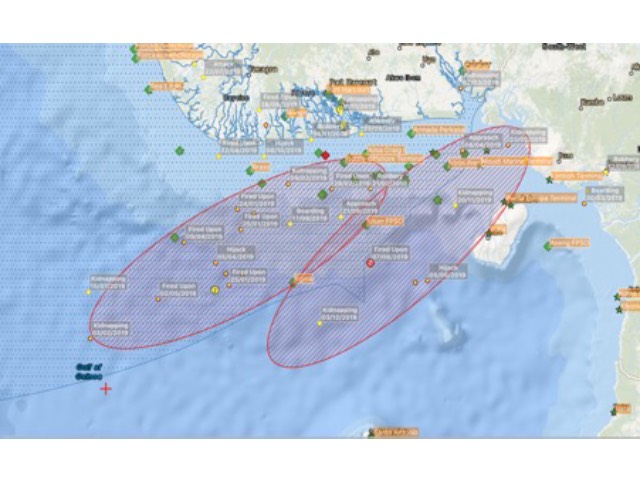 Reporting indicates that the tanker ISTANBUL was attacked while underway by one high-speed craft with 9 armed men aboard. The tanker conducted evasive maneuvers and following two failed attempts the pirates were seen to withdraw to a mothership vessel.

The tanker and crew are unharmed and have continued on their way.

This is the 7th MARSEC incident occurring beyond the eastern fringe of the Nigerian EEZ within 2019. Thus, far five of the seven incidents have occurred within 20nm of the eastern fringe of the Nigerian EEZ. Four incidents have involved kidnappings with one hijacking and two failed attacks. Whilst this area has witnessed maritime crime in previous years, only two incidents were recorded in 2017 and two in 2018 respectively.

This latest incident is further confirmation of a developing trend of incidents that are assessed to be perpetuated by a well-resourced pirate action group, most likely operating from one or more mother-ship vessels. On 19th December Dryad reported a sighting of a potential mothership vessel seen to be towing a speedboat 70nm NE of the latest attack. At the time, the vessel reporting the incident took the decision to alter course and leave the area at best speed. Hostile intent of a vessel towing a speedboat is hard to determine, however, whilst operating within an area of high risk, and with such a prevalent developing trend of deep offshore incidents, it is highly recommended that vessels are not complacent against potential risk factors and take appropriate counter measures and report all such sightings.

In the case of the latest incident, the INSTANBUL appears to have taken a south-western track from the Odudu terminal. This inadvertently tracked her vessel through the concentration of 2019 incidents. Trends within 2019 have shown a shift in the concentration of incidents from 2017 and 2018 from an area south of Port Harcourt, between the Bonny and Brass terminals, to a linear spread of incidents along the Eastern fringe of the Nigerian EEZ. The Eastern fringe of the Nigerian EEZ is particularly vulnerable due to the unique combination of factors, particularly the density of energy infrastructure and density of traffic transiting northbound to conduct operations within the Niger Delta region. With this confluence of factors and the significant geographic limitation imposed upon Nigerian security forces, pirates operating with both capability and intent are afforded the opportunity to act freely without significant risk of being interdicted.

This has led to a considerable drop in incidents in the areas west of the Brass and Agbami terminals. The evolution in trends should be understood and considered vital for all vessels conducting operations within the region and to ensure safe routing whilst within the high-risk area.