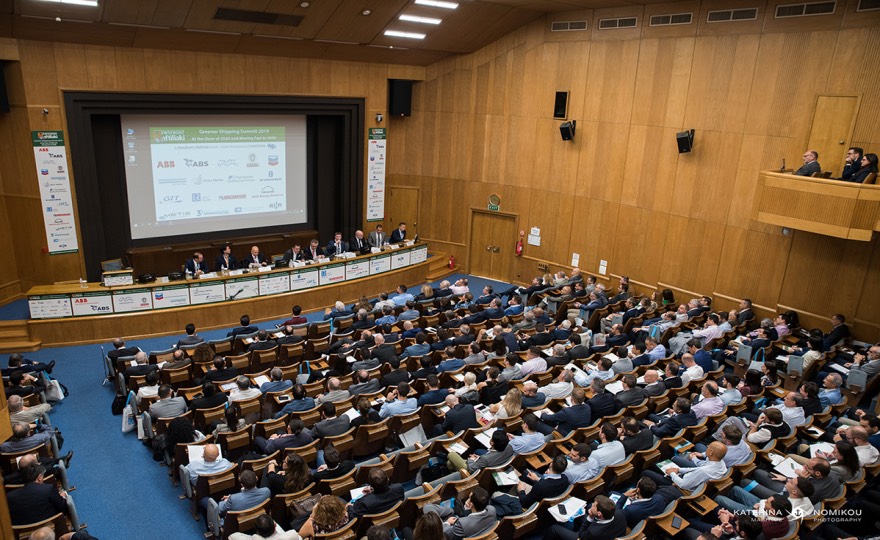 As shipping stands at the door of 2020 and is moving fast towards 2023, 2030 and on to 2050 it is still clear there is great concern about how to tackle life after January 1 and the Imo sulphur cap kicks-in.

As leading shipowner, George Procopiou says: “We have to clean our environment, and therefore there is a need for the desirable to be doable”.
With some 500 delegates from 14 countries representing 255 companies and organisations in the audience, the Greener Shipping Summit 2019, organised by Naftiliaki / Newsfront, under the auspice of Greece’s influential marine technical managers association – Martecma — Procopiou, as the keynote speaker, set the tone for the event, though speakers and delegates were often still at odds as to how to meet the new environmental regulations just 50 days down the road.
Recognised as one of the world’s leading, and practical, shipowners with a vast experience of running a diversified fleet of tankers, gas carriers and dry cargo ships, Procopiou has long been a vocal voice in the search as to how best approach Imo 2020 and deal with the future. He was quick to brand scrubbers as a hypocrisy, saying “they simply transfer the emissions from the air to the sea”.
Further, fresh from meeting with visiting China’s president, Xi Jinping, the previous day he noted China has banned open-loop scrubbers and from 2020 will ban high sulphur fuel. “China is determined to reduce emissions,” said Procopiou, noting more bans wilkl also soon be implemented.
He quickly confirmed he is, like the Union of Greek Shipowners, a supporter of “lower ship speeds not slow steaming” and wondered “why ships should travel so fast”. He said: “We have to target the reduction of emissions, but it is up to the oil refiners, engine builders and shipyards to lead the way”. He acknowledged lower ship speeds will require more ships to do the transportation job.
Procopiou said the technology exits for the refiners to produce compliant fuel and they should do so. He felt LNG was not the answer either and he would not order an LNG-fuelled ship.
When it comes to regulating the industry post 2020 the Glyfada, Athens-based owner said there is a need for a fair system for existing ships, especially new ships. He said: “it is difficult for Imo to take decisions because of the need for consensus”, but that it is up to Imo and class societies to take more responsibility in meeting the challenges beyond 2020.
Bill Stamatopoulos, of Bureau Veritas VeriFuel said the aim of the summit was to educate not to scare, noting blending fuels has always ”been there” but this will change. Compliance is not a 2020 issue, it is a 2019 one said Stamatopoulos who presented a number of case studies of fuels thought to be compliant but when tested were found not to be. He said that with management, proper preparation, planning and training “the technical challenges can be managed”.
Upgrading solutions for new fuels and fuel additives which will also help reduce emissions were presented.
Scrubber makers hit back and presented some impressive figures regarding the economies of the use EGCS, while scrubber operation and service experience presented revealed relatively few failures according to MAN Energy Solutions which has been involved in scrubber development since 2005.
Moving down the road to 2030 and 2050 and beyond took up two sessions, the first dealing with the pathway to decarbonisation and the options available as we move towards 2050 with an update on the forthcoming regulations on GHG and the compliance options and finally the short term measures to reduce emissions.
Bureau Veritas’ John Kokarakis, said it’s expected 3bn tonnes of CO2 emissions in the 2050 alone, “unless measures are taken”. He noted 60,000 vessels rely on diesel, only 600 use alternative fuels, before predicting that by 2030, 10% of the global fleet will be powered by LNG. He then called on everybody to “consider the emissions released over the full life cycle of the ships not just during fuel combustion”.
It was then time to look at the role of lubricants in a low emission future, LNG as a fuel, the pros and cons of GHG reduction measures, and a look at Imo short term measures and what is feasible and what is not.
The big ally of decarbonisation is digitalization, or it should be, the summit was told during the session on the new IT environment. The five presenters in this session then set out to demonstrate why this is the case by covering how big data can improve the efficiency of ships, its role in performance monitoring, what green and smart shipping have in common, how shipping can be modernised through digitatisation and autonomous ships technology.