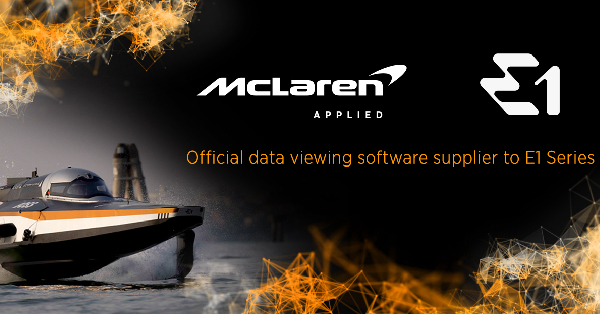 McLaren Applied has joined forces with E1 to provide telemetry and data viewing software to the engineers running the electric RaceBird boats in the UIM E1 World Championship.

The data analysis tools – which include ATLAS, System Monitor, and McLaren Control Toolbox – supplied by McLaren Applied will allow the engineers from E1 and SeaBird Technologies to view and analyse live and recorded data from the raceboats.

The data viewing software from McLaren Applied will also be made available to all the teams competing in the championship.

The E1 teams will utilise the data viewing software at test sessions and race events to analyse the performance of the RaceBird boat. The software will be used alongside a configuration tool which allows teams to alter the set-up of the Vehicle Control Unit (VCU), also supplied by McLaren Applied, giving teams influence over elements of the boat control, such as throttle mapping.

McLaren Applied has driven innovation in Formula 1 and global top-level motorsport series for over three decades, which has led to engineering solutions being adapted and deployed across other industries, including automotive and transport.

The partnership with E1 will see McLaren Applied expand its portfolio into the marine sector as Official Data Viewing Software Supplier for the championship.

Rodi Basso, Co-Founder & CEO of E1, said: “I’m happy to bring McLaren Applied on board as Official Data Viewing Software Supplier at E1. Having worked as Motorsport Business Director at McLaren Applied in the past, I know the tools and software they provide will be to the highest standard and will offer teams valuable insight. The data will not only be used to extract the maximum performance and monitor safety, but it will also be used to show real-time information to fans trackside or watching at home. I think data and certain touchpoints can play a role in making sports more accessible to viewers and actually add to the overall entertainment value.”

Josh Wesley, Head of Engineering at SeaBird Technologies, commented: “From an engineering perspective, it’s important that we can access and view data in real-time coming from the boats. With more testing planned in the coming months, we will rely on using this type of powerful software to record data and review it immediately after each run. We will use the learnings from this analysis to fine-tune the performance of the RaceBird prototype ready to hand it over to the teams.”

Richard Saxby, Director, Motorsport at McLaren Applied, said: “We are extremely excited to be working with E1 and SeaBird Technologies on this ground-breaking new championship, using our technology in a new racing series dedicated to bringing electrification to the marine market. The McLaren Applied ATLAS data viewer and McLaren Control Toolbox have been used in top-level motorsport for many years, allowing teams to derive winning margins through the accurate visualisation of time-sensitive data and we are delighted to see the benefits of this software being used in the E1 Series for a new application in marine.”