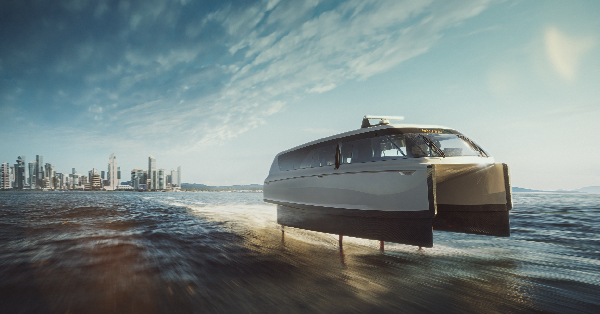 The electric boatmaker Candela unveiled the first product emerging from the battery collaboration with premium electric car brand Polestar announced in August 2022: Candela C-8 ‘powered by Polestar’, the longest-range electric boat to date, according to the company’s release.

The Candela C-8 will use the same 69 kWh battery pack and DC charging technology as the Polestar 2 and has an expected range of up to 57 nautical miles (65 US miles) on one charge at a cruising speed of 22 knots (25 mph). The range is two to three times longer than what conventional electric speedboats can achieve at high speed and compares favorably with how internal combustion engine powerboats are used.

Candela was founded in 2014 by CEO Gustav Hasselskog, employs 180+ persons, and has offices in Stockholm, San Francisco, and Cannes. Production takes place in Stockholm. Candela is the world’s first maker of electric hydrofoiling boats and ships.