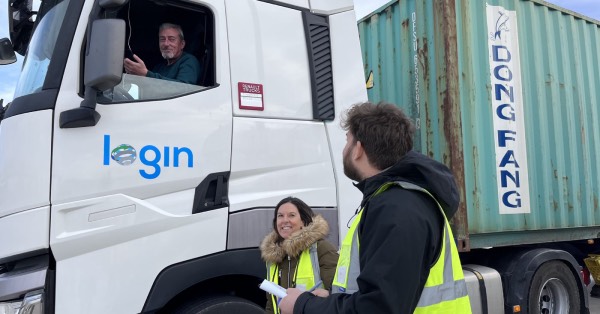 The technicians are working in the transport support areas of the Port of Valencia and at the access gates to the container terminals of COSCO, APM and MSC.

This 10-15 minute course will run for 35 days from Monday to Friday between 9am and 1pm. More than 5,000 drivers are expected to be trained.

With this initiative, queues and CO2 emissions will be reduced, loading and unloading operations will be streamlined, and the competitiveness of the logistics community will be enhanced

The Port Authority of Valencia (PAV) has begun this morning at the access gates to the terminals to train truck drivers on the ValenciaportPCS mobile application, a tool to facilitate the day-to-day activity of the hauliers who carry out their work in the Port of Valencia.

From today and over the next 34 days, Valenciaport technicians are explaining the use of this tool to lorry drivers with the aim of familiarising them with this App designed to facilitate their operations, reduce waiting times, reduce CO2 emissions and speed up the loading and unloading processes at the terminals. ValenciaportPCS trainers are at the entrances of the COSCO, MSC and APM terminals and the transport support areas, between 9:00 a.m. and 1:00 p.m. to disseminate the use and services of the App to the carriers.

A digital tool that makes the work of drivers easier and more efficient, but also that of the logistics chain as a whole, as it reduces times, reduces emissions, eliminates paper, speeds up procedures and favours the competitiveness of the sector. It is expected that during these days more than 5,000 truck professionals will be attended. ValenciaportPCS technicians have explained to the drivers the services of the tool, such as the processing of order forms, the detection of incidents, the state of traffic in the area and the modification of number plates on transport notices. They also helped those professionals who had not downloaded the application to install it and start using it. A 10-15 minute explanation to make life easier for hauliers.

Information panels have also been installed at the entrances to the three container terminals and in the transport service area with QR codes explaining how to use the App and how to access the download for both Android and iOS.

ValenciaportPCS is one of the first technological platforms or Port Community Systems in the world. This tool is used by around 1,100 companies and public bodies operating in the ports of Valencia, Sagunto and Gandia. Every day it manages more than 300,000 messages exchanged.