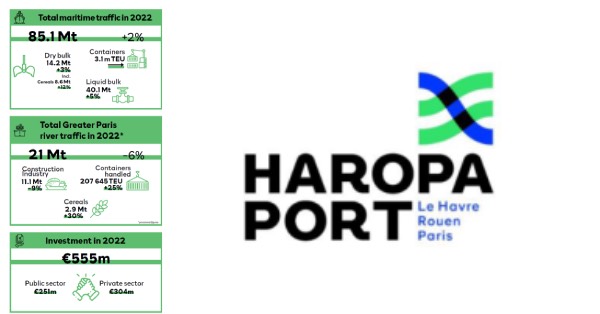 In an international context marked by numerous crises, HAROPA PORT has been progressing despite a market in downturn, demonstrating notable resilience, winning additional market share in the Northern Range and improving its modal shares on the Seine Axis. The port, which began its transformation at the time of the merger in 2021, is now seeing the first significantly positive results with MSC’s historic decision to invest in reinforcing the Seine logistics corridor. In 2023, France’s number 1 port intends to continue its investment and its transformation, developing the first decarbonised industrial ecosystem and continuing the structural development of its multimodal logistics corridor.

“In 2022, the global economy was impacted by Russia’s invasion of Ukraine, combined with the ongoing effects of the Covid-19 pandemic and inflation, which has reached levels not seen for several decades. And despite this, for HAROPA PORT, the year has been one of a change in scale and striking resistance to these headwinds in the context of strategic focuses approved by its Supervisory Board. These encouraging results and the consolidation of the port’s strategy make HAROPA PORT an effective project for local regions and a key component of France’s international outreach and sovereignty. This encourages us to pursue the transformation of France’s number 1 port.”

As a major pillar of HAROPA PORT’s strategic project, the ecological and energy transition account for 16% of the port’s investments in 2022 and will increase to 19% in 2023. Notably based on a number of calls for project proposals, the port is affirming its ambition to create a cutting-edge, decarbonised industrial cluster on the Seine Axis:

–          As part of a call for project proposals by the French energy and environment agency, ADEME, HAROPA PORT and its three port/industrial zones, working through the non-profits Synerzip – LH, Incase – Industrie Caux Seine and Upside Boucles de Rouen, submitted a joint response for the creation of the ZIBAC project (Zones Industrielles Bas Carbone/Low-Carbon Industrial Zone) on the Seine Axis, a project aimed at fostering development of low-carbon port/industrial zones. The project partners established a provisional list of studies costing over €10m for the preparation of the decarbonisation of industrial and logistics operations.

–          The largest multimodal platform of the Greater Paris area will soon be producing green energy using biowaste. PAPREC, a company, has been selected to design and operate the future methanisation plant to process household biowaste from the Paris area at the port of Gennevilliers. This plant has a capacity of 50,000 tonnes and, starting in 2025, will generate biogas for injection into the Paris area supply network, in addition to farm fertiliser.

–          Following the deployment of a network of LNG service stations, a new generation of multi-energy stations will be set up at multimodal platforms in the Paris area at Gennevilliers, Bonneuil-sur-Marne, Limay, Bruyères and Montereau. These facilities will be able to distribute decarbonised hydrogen to meet the needs of road transport, as well as river transport in a later phase.

–          At the Port-Jérôme port/industrial zone a new industrial cluster – “Plastic Valley” – dedicated to recycling and producing latest-generation renewable plastic is currently being organised, most notably around the projects of Eastman and Futerro. The site will also see production of renewable hydrogen with Air Liquide’s Normand’Hy project, which has an unprecedented capacity of 200 MW.

–          And lastly, the decision on the award following the Grand Canal call for project proposals in Le Havre, to be announced during the first quarter of 2023, will come as confirmation of this strategic focus.

–          In total in 2022, €590m of public and private-sector investment will have been devoted to building this decarbonised industrial cluster.

With their merger, the three ports of Le Havre, Rouen and Paris demonstrated their determination to develop a logistics corridor capable of carrying goods from around the world into the heart of France’s biggest consumer catchment area.

–          In 2022, shippers grasped the opportunity to use Seine Axis rail and river transport as an alternative to road for their goods imports and exports: the modal shares of rail and river rose from 12% to 13.3% for containers exiting Le Havre as of end October, and at Paris Terminal SA on the river, inland waterway activity handled increased by 25%, boosted by the launch of new river-based services (Greenmodal/Hapag Lloyd in September 2022 and Fluviofeeder/Marfret in November 2022).

–          On January 6, HAROPA PORT awarded the Bruyères-sur-Oise terminal to MEDLOG in order to support the implementation of MSC’s investment at Port 2000. This project comprises a trimodal terminal, combining rail and river, dedicated to container services in the Greater Paris region and nearby consumer catchment areas, which should enable a million road journey to be avoided over a ten-year period.

–          New strategic port infrastructure will enable development of the logistic corridor over the medium term: this is true of PSMO (Port Seine Métropole Ouest/West Metropolitan Seine Port), the construction work for which is to begin in 2023, and the “cat flap” project (Port 2000 direct river access) for which the relevant public consultation process ended today. This direct river connection between the terminals of Port 2000 and Le Havre’s historical port, scheduled to enter into service in 2024, will encourage further expansion of the modal share of river transport along the Seine Axis.

–          Work on Port 2000 berths 11 and 12 (adding an extra 700m of quay span to the existing 3,500m) will be completed where port infrastructure is concerned and delivered to the operator in 2023 to enable the latter to carry out its own work as required for use of the future terminal.

–          Alongside this, HAROPA PORT continues to foster innovation and work towards tomorrow’s urban river logistics, as exemplified by IKEA, which has been making deliveries to its Paris customers by river and electric vehicle since last December, thereby avoiding an annual 300,000km of road journeys between its Gennevilliers depot and Paris.

In 2022 maritime traffic stood at 85.1Mt, an increase of 2% on the back of an exceptional trading year for cereals and a rise in liquid bulk flows.

–          Container traffic remains at the record level achieved in the previous year, registering throughput of 3.1m TEU, surpassing the symbolic figure of 3m TEU. HAROPA PORT is consolidating its position in an uncertain economic environment. HAROPA’s market share has progressed in a context marked by a general downturn in container traffic at the Northern Range ports.

–          Liquid bulk ended the year up 5% (40.1Mt) buoyed by an expansion in crude oil traffic (+23% at 18.8Mt) thanks to the operation at full capacity of the two Seine Axis refineries despite the international context requiring changes in product sourcing.

–          Dry bulk saw growth of 3% (at 14.2Mt), boosted by a grain trading year up by 12% (8.6Mt). The conflict in Ukraine generated not only additional demand, but also demand from countries rarely served in recent years, especially in the second half of 2022, when 5Mt was shipped, a record for this part of the year. Traffic in aggregates was down by 4 % due to the current situation of certain major construction projects on the Seine Axis, these having entered phases that require less construction work.

–          Ro-ro traffic fell back by 11% (265,000 vehicles). Adapting to a volatile market, the port switched from an export-led market to one dominated by imports, which required an overhaul of its parking areas.

“Eighteen months after its creation and following a historic year in which the symbolic level of 3m TEU was surpassed, HAROPA PORT has consolidated its positioning. In addition to the remarkable resistance shown by traffic levels, key milestones have been achieved, foremost among them the announcement by MSC TiL last July that they would be investing €700m over the period to 2028 to triple their container volume, making us a major port of entry for France and Europe and giving us the means to develop river-based services to the Paris basin.