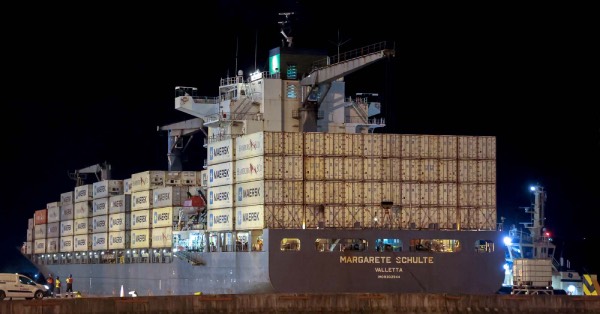 The Moín Container Terminal welcomed its 4000th vessel since it’s inauguration in 2019. A commemorative plaque was presented to the captain of the Margarete Schulte, which arrived from Manzanillo, Panama and will continue to Cork, Ireland, with a primary cargo of pineapples and bananas.

Thanks to infrastructure improvements made during the last three years, the Limón-Moín Port complex can now accommodate ships with greater draught, up to 8500 TEUs.

With Costa Rica being one of the last ports that these services call at in America before leaving for Europe, we’re able to provide very competitive transit times for Costa Rican fruit.

In a joint effort between APM Terminals Moín and various government authorities, idle time at both berthing and departure was reduced from 130 minutes to less than 90 minutes.

Reduced idle times – the time when a vessel is berthed and no containers are being loaded or unloaded – allow ships to depart faster, reducing the time spent in port and increasing the possibility of using eco-speed in transit. In turn, this reduces bunker consumption considerably, which brings both financial and environmental benefits.

APM Terminals Moín will continue to follow the company’s global Way of Working principles – a Lean Manufacturing, continuous improvement philosophy. “In 2023, we are planning continuous improvement projects together with TCM’s customers and users, with the aim of increasing occupational safety in all our activities, delivering more value through our services and reducing waste or slippage in processes,” commented Mehdi Ben Mouloud, Chief Operating Officer.

APM Terminals Moin will continue to work on receiving larger vessels, implementing new technologies and value-added services, as well as investing in safety and security, while coordinating with national authorities.

“Our goal is to create the right balance between controls and facilitating international trade,” says Konen. “By increasing cargo security and digitising more processes we will enable Costa Rican government authorities to meet their trade objectives and support our customers and users of TCM.”