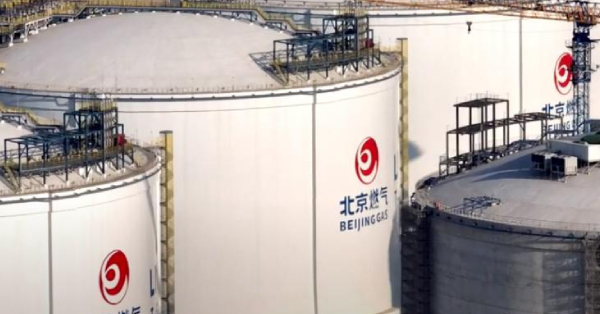 These very large onshore LNG tanks are part of the agreement signed in November 2019 between GTT and the Chinese state-owned company Beijing Enterprises Group (BEG), relating to the construction of eight onshore tanks using GST® technology, at the BGG Tianjin Nangang LNG terminal.

The construction schedule remained on track, despite the constraints imposed by the COVID-19 pandemic. The two onshore tanks are now entering the commissioning phase and will be operational in the first half of 2023.

The GST® technology developed by GTT offers many advantages compared to a traditional onshore LNG tank: safer storage management through integrated monitoring, greater storage capacity for the same footprint and greater respect for the environment.

Philippe Berterottière, Chairman and CEO of the GTT Group, stated: “The construction of these first two onshore tanks marks an important milestone for BGG’s LNG terminal in Tianjin. These tanks are the first of eight planned for the site and are already the largest onshore tanks in the world equipped with our GST® technology. We thank BGG and the Chinese government for their trust and wish HQCEC every success of this new terminal.”

Mr. Laurent Bili, Ambassador of France in China, said at this occasion: “These tanks are an industrial success story, a very concrete example of a fruitful Franco-Chinese partnership, a technological innovation and part of the response to the challenges of climate change”

Mrs. Yalan Li, Chairwoman of BGG and President of IGU, declared: “This milestone is the reward of five years of assessment, preparation, engineering and actual construction. The City of Beijing and Beijing Entreprises Group are proud to have evolved this emerging technology into a promising solution for many projects around the world. Thanks to this world first, these containment membrane tanks are on their way to becoming the state-of-the-art in LNG storage. We have been impressed by the dedication and passion of GTT and HQCEC to make this world first a success, and we thank the French and Chinese authorities for supporting such an important technology partnership between our two countries.”

Mr. Shaoguang Song, Chairman of HQCEC, declared: “We are proud to have successfully completed these two world largest onshore membrane tanks with the strong support of GTT, thanks to the precious opportunity provided by BGG. With the advantages of higher efficiency and lower carbon footprint, membrane system has been proved to be a good choice for upcoming LNG projects, both onshore and offshore. Committed to continuous technology innovation and process optimization, HQCEC will continue to promote membrane technology to domestic and international markets and bring value to our clients.”