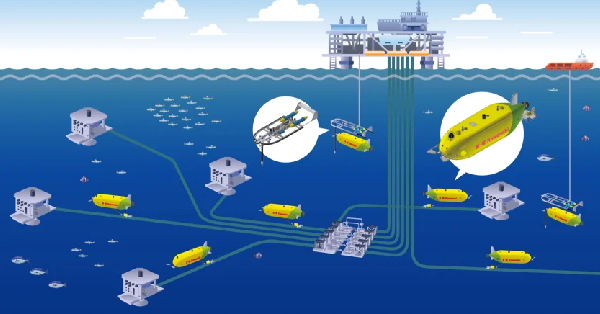 Starting in October 2020 and lasting through February 2021, basic design was completed and various integration simulations were performed. Then, beginning in August of 2021, more detailed design and modifications of SPICE were conducted in order to incorporate TotalEnergies’ LTCP. These preparations made possible the verification test off Awaji Island from August 30 through September 2, resulting in the successful measurement by LTCP integrated with SPICE of the electrical potential of subsea pipelines.

First, for this offshore test, simulated pipes and a corrosion protection system were placed on the seabed under the supervision of TotalEnergies. In the test, SPICE – utilizing its time-tested, excellent pipe-tracking capability and highly precise autonomous control of the robot arm – successfully performed measurements of electrical potential using the robot arm with its newly-integrated measurement device to check the pipelines’ state of protection against corrosion inferred by the measurement of the electrical potential. The successful outcome suggests that SPICE can achieve automation and reduce operational time in close-range subsea pipeline inspections currently performed by ROVs (Remotely Operated Vehicles), including measurement of electrical potential.

“LTCP had demonstrated its repeatability of establishing the effectiveness of the cathodic protection system in a controlled test environment, and there was a need to deploy the technology in close proximity to the pipe under inspection. SPICE with the ability to deploy sensors at a controlled distance, enabled LTCP to demonstrate repeatable performance. The potential for additional sensors to be deployed at the same time, should enable other non-destructive test sensors and techniques, providing enhanced data of aging pipeline and allowing integrity threats to be assessed with more detail. The future trend of subsea robotics is for highly maneuverable sensor platforms, and the performance of LTCP integrated with SPICE, provides an effective solution to determine the performance of the cathodic protection system in an operational context.”

“We have combined self-own technologies of underwater vehicle and industrial robot to develop an AUV with an arm called SPICE. By using the arm, we are confident in accurately positioning the sensor to the target where proximity is required. We are very pleased to receive the great opportunity of this joint offshore verification sea trial from TotalEnergies. In this sea trial, we could obtain useful inspection data in combination with LTCP and also could demonstrate the ability of SPICE as a pipeline proximity inspection platform, continuing from 2020. We will continue to develop it in search of further possibilities.”

In 2021, Kawasaki received an order from the UK’s Modus Subsea Services Limited for the first commercial model of SPICE, which will be an upgraded version of the SPICE that was used for this verification test, and is currently working on production and tests for its commercialization.

To meet growing market demand for underwater equipment such as AUVs, which can achieve more advanced unmanned automated operations, Kawasaki is committed to developing high performing high-quality products and accelerating its development efforts to expand commercial utilization of AUVs.