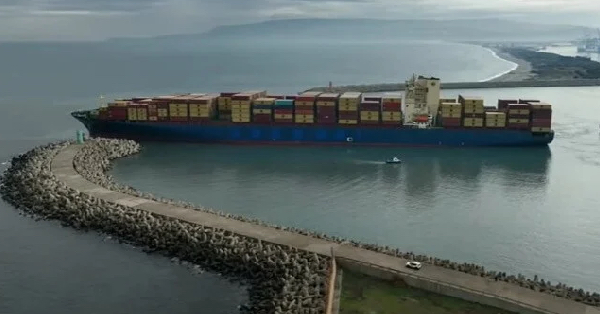 Operations resumed at Italy’s largest container port, Gioia Tauro, 24 hours after an MSC containership veered off course while maneuvering and grounded on the southern breakwater at the port’s entrance. The MSC Elaine (98,968 dwt) was outbound on Monday morning, January 9, with good weather at the time of the grounding, according to The Maritime Executive.

The 1,114-foot vessel operates a route that takes it between the U.S. East Coast and the Mediterranean. It was departing Gioia Tauro on Monday bound for Malta with the assistance of two port tugs when for unknown reasons it struck the breakwater and became stuck blocking the entrance to the port. The vessel has a capacity of 8,500 TEU. Operations at the port were suspended trapping eight other ships in the harbor.

The Italian authorities are reporting that weather was not an issue at the time of the grounding. They said that winds were between 6 and 9 knots and they did not believe the wind and sea conditions contributed to the grounding. However, stronger winds gusting up to 25 knots from the northeast helped in the operation to free the vessel.

The port authority sent its patrol boat to the scene immediately after the grounding and reported that there were no signs of leaks from the vessel or any visible damage. Five local tugs were dispatched to participate in the efforts to free the containership. Efforts continued overnight and into the morning on January 10.

The MSC Elaine was moved to the anchorage outside the port where local divers are inspecting the hull. The Coast Guard is also undertaking an investigation into the circumstances of the grounding.