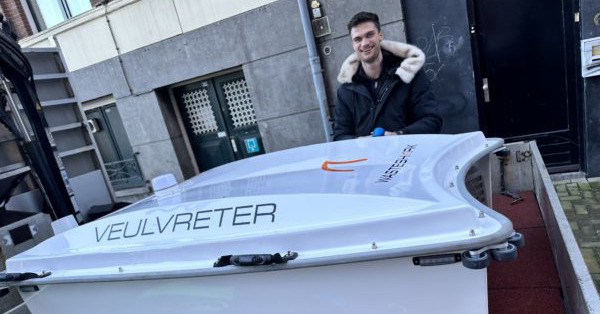 The WasteShark is an ‘aquadrone’ that will keep the canal clean of litter, hopes the municipality of Zaanstad. Today it was presented to the public and the new directors of the waste and cleaning service. The shark must keep the Gedempte Gracht clean of the large amount of waste that visitors to the city center throw into the water. Because the Gedempte Gracht is frozen, he was allowed to enter the Zaan for this time.

“We used to have a four-metre shovel and then you couldn’t reach everything,” says Aad van der Wal. He and his colleagues Erik and Wendy can’t wait to pilot the aquadrone. Wendy Fischer lets the men try first, “but I think it would be fun to sail that thing in the canal.” The remote-controlled boat owes its name to the ‘whale shark’ and with a little imagination you can see that in it.

The municipality has baptized the aquadrone “Veulvreter”, the name came about from 130 entries that the city received for the device. Alderman Wessel Breunesse is the first to play with the boat today. Concentrated, he sails the Wasteshark over the Zaan, while Aad throws some cans into the water for the shark to eat. “I hope everyone sees that we are doing everything we can to keep the canal and the center clean.” He therefore calls on visitors to throw their waste in the waste bins as much as possible.

Top Glory Marine demonstrates its commitment to cleaner seas by joining the everwave project with the aim of protecting our oceans from plastic through...