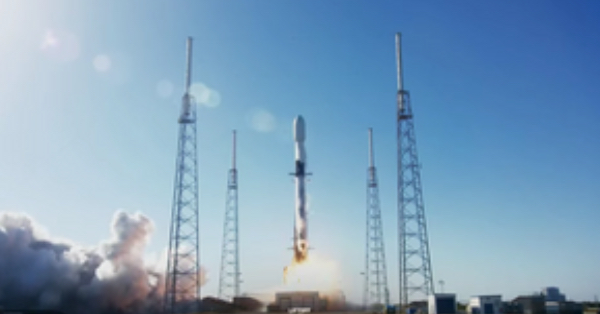 Skykraft a Canberra-based space-services company has sent the largest Australian-made payload into space. At approximately 300kg, this locally manufactured satellite stack weighs more than the total mass of all Australian-built space objects ever launched.

The 5 satellites lifted off from Cape Canaveral Space Force Station in Florida, around 1.56 am on 4 January 2023 AEDT on board a SpaceX Falcon 9 rocket.

This launch will be the first of over 200 satellites set to orbit the Earth over the next 2 years that will make global air travel smoother and more efficient.

The satellites will form a constellation to deliver Skykraft’s global Air Traffic Management (ATM) service. This space-based service will track aircraft and address gaps in surveillance and communications over remote areas.

“We rely on air traffic control to avoid mid-air collisions, even in the middle of the Pacific Ocean. With Skykraft’s service, air traffic controllers will be able to see the aircraft at all times and talk directly with the pilot anywhere in the world,” said Dr Michael Frater, CEO of Skykraft.

“So if you’re flying from Sydney to LA and your aircraft hits turbulence, the pilot will now be able to get a clearance to change altitude much more quickly. For passengers, this means they won’t need to be seated for long periods of time, and for airlines savings on fuels savings and a reduction in the environmental impact.”

“This first launch is just the start. Over the next 2 years, Skykraft is building and launching a satellite constellation that will accurately track and monitor aircraft movements globally, allowing aircraft to follow more efficient flight routes.”

Airservices Australia is supporting the proof-of-concept of the technology of the ATM service through the collaboration agreement. This is part of Airservices’ strategy to transition to space-based services. Skykraft is also working closely with partners in the Pacific where the ability to provide ATM services is particularly relevant with vast amounts of the ocean and little land mass for infrastructure.

ATM relies on communications, surveillance and navigation services. Currently, ground-based infrastructure is limited to approximately 400km from land which makes it difficult to accurately track aircraft and ensure their safety over oceanic and remote areas.

“This proof of concept launch will see Skykraft testing the operational capability over the next 3 months. We expect commercial operations to commence in 2025 when air navigation service providers around the world take up the service,” said AVM (Retd) Mark Skidmore, Chairman of Skykraft

“We are taking giant leaps forward into a whole new era in space and creating a global industry from our nation’s capital. We are creating a capable and robust space economy, starting with the design and manufacture of satellites, giving young aerospace engineers the opportunity to run space missions, making a career in the space industry a reality in Australia.”

Skykraft’s collaboration with supply chains from across regional Australia has delivered a best-of-breed resilient production process. From a Newcastle-based company assembling Printed Circuit Boards to a Wodonga-based engineering firm undertaking machining and fabrication of chassis components, and a Queanbeyan-based coating company applying thermal finishes to the satellites. This new home-grown industry is set to make waves on an international scale.

Skykraft is building a foundation to launch multiple space missions that will deliver the next generation of space-based air traffic management capability.