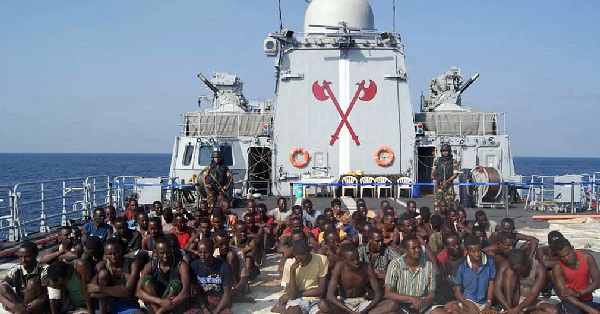 The legislation will apply to India’s Exclusive Economic Zone (EEZ), which extends to 200 nautical miles from the coastline, and penalty for piracy includes the death sentence.

The Rajya Sabha (upper house of the Indian parliament) passed the Anti-Maritime Piracy Bill, which aims to provide an effective legal tool to combat maritime piracy. The bill assumes importance as India’s strategic location on the world’s major shipping routes, combined with its long coastline of approximately 7517 kilometres, makes it an important hub for global trade. Especially at the time when the world is looking towards India as a “China plus one” policy, as EAM Dr Jaishankar put it maritime security is key to safeguarding India’s security and economic well-being. The security of the sea lanes of communication is vital as over 95% of India’s trade is conducted via these routes and more than 80% of the country’s hydrocarbon needs are imported by sea.

The bill aims to prevent maritime piracy and prosecute individuals for such piracy-related crimes. It will apply to all parts of the sea adjacent to and beyond the limits of India’s Exclusive Economic Zone (EEZ), which extends to 200 nautical miles from the coastline. The bill also incorporates the United Nations Convention on the Law of the Sea (UNCLOS).

The bill defines piracy as any illegal act of violence, detention, or destruction committed against a ship, aircraft, person, or property for private purposes by the crew or passengers of a private ship or aircraft. This includes any other activity that is considered piratical under international law and inciting or intentionally facilitating such acts. Piracy also includes voluntary participation in the operations of a pirate ship or aircraft used for piracy.

Under the provisions of the bill, the Central Government, in consultation with the Chief Justice of the relevant High Court, has the authority to designate Sessions Courts as the court of jurisdiction for offences committed by individuals in the custody of the Indian Navy or Coast Guard, regardless of nationality, as well as by Indian citizens, foreign residents in India, or stateless persons. However, the Designated Court will not have jurisdiction over offenses committed on foreign ships unless requested to intervene by the country of origin of the ship, the ship owner, or anyone else on the ship. Warships and government-owned ships used for non-commercial purposes are not subject to the jurisdiction of the Designated Court.

One potential challenge with the bill is that it provides for a mandatory death penalty for acts of piracy that cause or seek to cause death. This could be seen as violating Articles 14 and 21 of the Indian Constitution, as the Supreme Court has previously ruled in the cases of Bachan Singh vs. State of Punjab and Dalbir Singh vs. State of Punjab that mandatory death penalty for any offence is unconstitutional as inter alia it denies courts their right to exercise their discretion on whether to impose a death sentence on the peculiar facts and circumstances of case. The Supreme Court has also narrowed the application of the death penalty to ‘rarest of rare cases’. However, there are other laws in India, such as the Scheduled Castes and Scheduled Tribes (Prevention of Atrocities) Act, 1989, that provide for mandatory death penalty for certain offences.

Further, since penal consequences for ‘committing an act of piracy’ are different from ‘participating in an act of piracy’, it is unclear how punishment would be determined and would be interesting to see how the courts would interpret and differentiate the same as on the face of it both expressions could have the same interpretation. The bill also raises the question of whether it should cover the EEZ, which extends from 12 nautical miles to 200 nautical miles from the coastline.

In conclusion, the Anti-Maritime Piracy Bill 2022 is a significant step towards combating maritime piracy, enhancing maritime security as well as addressing the nebulous areas where the Suppression of Unlawful Acts Against Safety of Maritime Navigation and Fixed Platforms on Continental Shelf Act (SUA Act), 2002 is inapplicable but acts of piracy are covered by UNCLOS. This bill is a step in the right direction where it will further strengthen India’s maritime security, including the safety of maritime trade and is a reiteration of India’s compliance and support to UNCLOS.

(R. Venkat Prabhat is an Advocate practising before the Supreme Court of India and the Delhi High Court. His Twitter handle is @rvprabhat9)