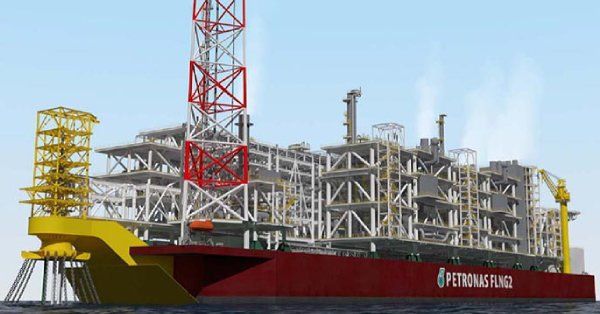 JGC Holdings Corporation announced that JGC Corporation, which operates the overseas Engineering, Procurement and Construction (EPC) business of the JGC Group, and as the leader of a consortium with Samsung Heavy Industries (SHI), has been awarded the Engineering, Procurement, Construction, Commissioning (EPCC) contract for a nearshore Floating Liquefied Natural Gas (FLNG) facility project in Malaysia planned by Petroliam Nasional Berhad (PETRONAS), the Malaysian oil and gas company.

This facility will be the first nearshore FLNG in the world as well as the third floating LNG plant to be constructed for offshore gas fields in Malaysia, with a minimum production capacity of 2 million tonnes of LNG per annum and scheduled for completion in 2027. JGC’s main responsibilities will cover the engineering, procurement and commissioning work for the FLNG topside, the associated onshore facilities, as well as the management of the overall project. As for the consortium partner, SHI will be responsible for the FLNG hull EPC work and the modular fabrication of the topside.

Since the 1980’s, the JGC Group has executed EPC projects for PETRONAS for all nine trains of the LNG plants at the PETRONAS LNG Complex in Bintulu, Sarawak, which has an annual production capacity of approximately 29 million tons per annum, and in 2021 the successful completion of PETRONAS’ second FLNG facility, PFLNG Dua, the world’s first deep-water FLNG facility currently in production.

As a leading global contractor for LNG and Floating LNG projects, the JGC Group also achieved the Mozambique Coral FLNG 1st Cargo in November of this year. The Group’s experience includes two other newly-built EPC FLNG projects out of the total of three in operation around the world, and is currently performing the FEED for an FLNG project in Nigeria.

JGC Holdings Corporation Representative Director, President and COO Tadashi Ishizuka said, “We believe that our consortium secured the order for the PETRONAS FLNG facility project on the basis of JGC’s world-leading project management capabilities and the company’s advanced and proven technologies in LNG plants, accounting for about 30% of LNG plants worldwide, as well as SHI’s world-class shipbuilding capabilities in this field. JGC’s strong leadership backed by excellent project management know-how has been demonstrated during the Front End Engineering Design (FEED) stage.”

Ishizuka went on to say, “It is our sincere wish to continue to contribute to the realization of planned FLNG plants and LNG plants, with LNG positioned as a key energy transition source. In doing so, JGC will leverage its accumulated experience and achievements, founded on an abundance of high-level execution and technical capabilities.”