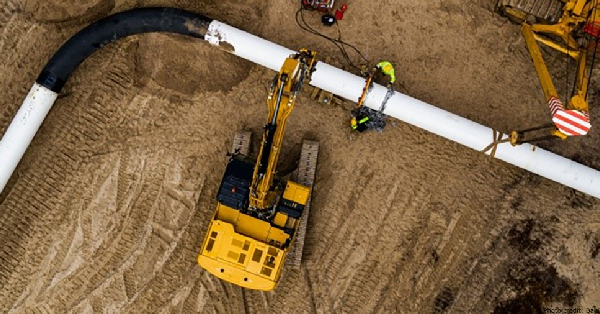 Energinet, the Danish national transmission system operator for electricity and natural gas has received Certificates of Conformity (CoC) from DNV, the independent energy expert and assurance provider, for its section of the major offshore Baltic Pipe project. The CoC’s were handed over at a ceremony in Energinet’s office in Ballerup, Denmark in December 2022. The £2billion gas pipeline is a strategic infrastructure project with the goal of creating a new gas supply corridor for the European market.

With an annual capacity of 10 billion cubic meters, the Baltic Pipe Project will allow gas transport from Norway to Denmark and Poland. DNV was contracted early in the project to deliver technical assurance services, and ultimately support the Authority with the permitting needed to take the new infrastructure into use. The contract scope included independent verification, complex independent modelling and submarine pipeline certification to the DNV certification regime DNV-SE-0475. Acceptance criteria comprised of the Danish Continental Shelf Law, the world recognized standard DNV-ST-F101, and the suite of underlying DNV standards and recommended practices. Work took place during the engineering, procurement, construction, installation, hook-up, and commissioning phases of the project.

The Baltic Pipe achieved final investment decision in 2018 and was partly funded by the EU. By providing Poland with a new energy supply, enabling the country to move away from coal fired powerplants and reduce its overall CO2 emissions, the project aligns with the objective of the subsequent REPowerEU plan. This scheme sets out a series of measures to fast forward the green transition while increasing the resilience of the EU-wide energy system, in order to accelerate the move away from Russian fossil fuels.

DNV’s 2022 Energy Transition Outlook launched recently in Copenhagen forecasts that natural gas will peak in 2036, then slowly taper off to end some 10% below today’s levels by 2050. Gas has staying power owing to its diversity of uses: half of the demand for gas is as final energy in manufacturing, transport and buildings, and the other half through transformation for other final uses such as electricity, petrochemicals and hydrogen production.

Mick Cramer Jakobsen, Project Director, Energy Systems at DNV, said: “The Baltic Pipe project is extremely complex with many stakeholders. DNV is proud to work on projects that support energy security, reduce CO2 emissions and align with EU’s energy transition. We are pleased that Energinet selected DNV as an important partner in our role to provide assurance services to avoid risks for this capital infrastructure project.”

Energinet’s part of the large-scale project consists of 105 km pipeline in the North Sea, approximately 210 km pipeline underground across Denmark, an expansion of the receiving Nybro gas terminal, and a new compressor station at Everdrup in Southern Zealand. DNV also assisted with professional services to Energinet on the onshore pipelines, compressor station and gas terminal.

Prajeev Rasiah, Executive Vice President for Energy Systems, Northern Europe at DNV, added: “This project has become strategically important as Europe’s energy supply challenges came to the forefront of the agenda in recent months. The project represents a crucial step in Poland’s desire to free itself from its reliance on Russian gas and to decarbonize its economy in line with its commitment to the Paris agreement.

“We are pleased to have been involved with this project and I am proud of our teams which worked tirelessly to provide assurance and technical expertise to Energinet, in line with our purpose of safeguarding life, property and environment.”

Peter Hodal, CEO Energinet Gastransmission, added: “We are happy to receive the DNV certificates to permit conditions from the Danish Energy Authority. The start-up and export of natural gas to Poland on time was key for Energinet and we acknowledge the professionalism, engagement, access to pipeline experts and valuable service provided by DNV to the Baltic Pipe project.”

The Certificates of Conformity were handed over at a ceremony in Energinet’s office in Ballerup, Denmark in December 2022.