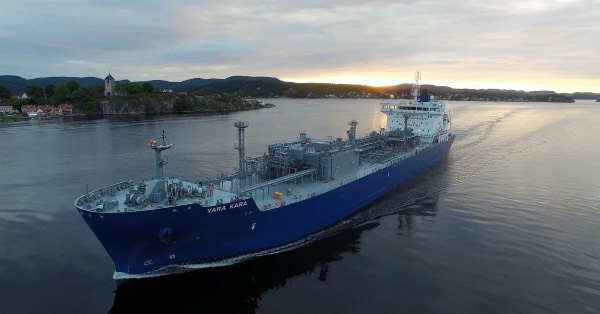 Yara International plans to modify its ammonia terminals in Germany and will enable handling of up to 3 million tons of ammonia. This equates to roughly 530,000 tons of hydrogen and will help speed up the hydrogen economy in Germany

Beyond being a vital component of fertilizers for food, clean ammonia is a sustainable source of feedstock to industries and applications. Ammonia is a hydrogen carrier of energy for use in the transport sector and as a carbon-free shipping fuel. It may also be used as an emission-reducing additive to coal-fired power plants. Yara aims to increase its production of clean ammonia globally to be able to supply Germany’s emerging market.

Yara made the announcement during Vice-Chancellor Dr. Robert Habeck’s visit to Norway.

“Dr. Habeck and other German leaders have been crystal clear in their ambitions to ramp-up the hydrogen economy. As a response, I’m proud to say that Yara has identified a substantial potential to increase ammonia imports to Germany in line with growing market demand”, says CEO of Yara International, Svein Tore Holsether.

“By summer 2023 our export terminal in Brunsbüttel will be modified to import as well. In addition, the terminal in Rostock can increase the imported volumes. In total Yara would be able to deliver 3 million tons of clean ammonia if demand is there. With additional tank capacity we can expand our import capacity much further”, says Yves Bauwens, Plant Manager in Brunsbüttel.

Following one of the greatest German inventions in the 20th century, Yara has almost 100 years of experience using the Haber-Bosch process to produce ammonia. Today Yara is the world’s largest ammonia distributor with the largest global production- and transport infrastructure. Already a major hydrogen player, Yara produces and consumes approximately 7% of European hydrogen.

Yara’s subsidiary Yara Clean Ammonia is currently rolling out a portfolio of decarbonized ammonia production. Green ammonia is produced with renewable energy and electrolyzers. The carbon emissions from blue ammonia production are captured and permanently stored. Together they amount to clean ammonia.

“As we develop our decarbonized projects across the world, we will import clean ammonia to Germany using Yara’s fleet of ammonia carriers, the largest in the world”, says Magnus Krogh Ankarstrand, President of Yara Clean Ammonia.

New ammonia storage requires significant investments in addition to operational and safety experience. Yara’s existing assets and competencies will be critical for a speedy ramp-up.

“Yara Deutschland and Yara Clean Ammonia are excited to be working closely with the German Government on a local and federal level and with German business partners to enable the German hydrogen economy through its ammonia infrastructure and almost 100 years of operational experience”, says Magnus Ankarstrand.

The ammonia link between Norway and Germany

Yara was founded in Norway in 1905 to combat the famine threatening Europe at the time. Today, it is a global crop nutrition company, with operations in over 60 countries around the world. Yara Deutschland GmbH is the largest ammonia and fertilizer company in Germany and a leading player in the German industrial nitrogen market. Yara International’s subsidiary Yara Clean Ammonia is the worlds’ largest ammonia distributor, developing multiple clean ammonia projects world-wide, including in Germany.