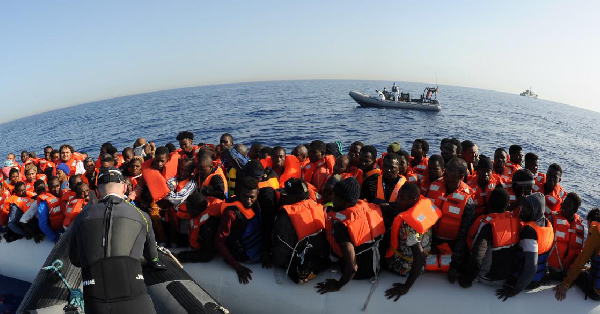 Human Rights at Sea has joined with a range of civil society organisations to issue the following statement:

“We, civil organisations engaged in search and rescue (SAR) activities in the central Mediterranean Sea, express our gravest concerns regarding the latest attempt by a European government to obstruct assistance to people in distress at sea.

A new law decree, signed by the Italian President on 2 January 2023, will reduce rescue capacities at sea and thereby make the central Mediterranean, one of the world’s deadliest migration routes, even more dangerous. The decree ostensibly targets SAR NGOs, but the real price will be paid by people fleeing across the central Mediterranean and finding themselves in situations of distress.

Since 2014, civilian rescue ships are filling the void that European States have deliberately left after discontinuing their state-led SAR operations. NGOs have played an essential role in filling this gap and preventing more lives being lost at sea, while consistently upholding applicable law.

Despite this, EU Member States – most prominently Italy – have for years attempted to obstruct civilian SAR activities through defamation, administrative harassment as well as criminalising NGOs and activists.

There already exists a comprehensive legal framework for SAR, namely the UN Convention on the Law of the Sea (UNCLOS) and the International Convention on Maritime Search and Rescue (SAR Convention). However, the Italian Government has introduced yet another set of rules for civilian SAR vessels, which impede rescue operations and put people who are in distress at sea further at risk.

Among other rules, the Italian government requests civilian rescue ships to immediately head to Italy after each rescue. This delays further lifesaving operations, as ships usually carry out multiple rescues over the course of several days. Instructing SAR NGOs to proceed immediately to a port, while other people are in distress at sea, contradicts the captain’s obligation to render immediate assistance to people in distress, as enshrined in the UNCLOS.

This element of the decree is compounded by the Italian government’s recent policy to assign ‘distant ports’ more frequently, which can be up to four days of navigation from ships’ current location.

Both factors are designed to keep SAR vessels out of the rescue area for prolonged periods and reduce their ability to assist people in distress. NGOs are already overstretched due to the absence of a state-run SAR operation and the decreased presence of rescue ships will inevitably result in more people tragically drowning at sea.

Another issue raised by the decree is the obligation to collect data aboard rescue vessels from survivors, which articulates their intent to apply for international protection and to share this information with authorities. It is the duty of states to initiate this process and a private vessel is not an appropriate place for this. Asylum requests should be dealt with on dry land only, after disembarkation to a place of safety, and only once immediate needs are covered, as recently clarified by the UN Refugee Agency (UNHCR).[1]

We, civil organisations engaged in SAR operations in the central Mediterranean, urge the Italian Government to immediately withdraw its newly issued law decree. We also call on all Members of the Italian Parliament to oppose the decree, thereby preventing it from being converted into law.

What we need is not another politically motivated framework obstructing lifesaving SAR activities, but for EU Member States to finally comply with existing international and maritime laws as well as guarantee the operational space for civil SAR actors.”

Signed by the following Search and Rescue organisations:

Signed by the following related organisations: