Cyprus Shipping News
Home World Container traffic by train in the Port of Valencia grows by 10.24% 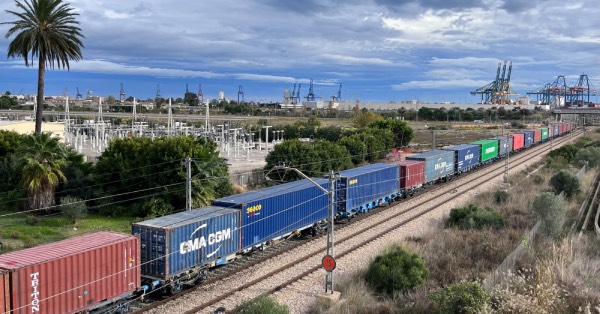 Container traffic by train in the Port of Valencia has grown by more than 10% in the first eleven months of the year. A symptom of the commitment being made by the Port Authority of Valencia (PAV) to boost rail connectivity and increase the quota arriving or leaving the Valencian precinct by rail. Thus, according to the Bulletin, during this period 216,965 containers have been moved by rail, 10.24% more than the previous year, while the total amount of goods transported by train has been 2,851,377, with an increase of 5.1%.

This means that between January and November of this year more than 4,200 trains have passed through the Port of Valencia, which is reflected in a weekly average of more than 87 units compared to 77 trains per week in 2021. Every week there are more trains, longer, with more wagons and carrying more goods and containers. The average length this year is 494 metres, 4.5% more than the previous year, and the number of wagons has exceeded 80,000 compared to 76,000 in 2021.

The PAV’s objective for the coming years is to continue to increase the use of the train in freight traffic arriving and departing from Valenciaport, hence the importance of undertaking the necessary actions to adapt rail accessibility. Thus, the PAV is making investments to take advantage of the synergy between maritime and rail transport in order to promote competitiveness and contribute to the reduction of CO2 emissions.

Specifically, investments of around 240 million euros are planned to promote accessibility and improve Valenciaport’s rail network. These actions are aimed at the remodelling of the railway network in the Port of Valencia, the electrification of tracks, the adaptation of the network to the European gauge, the railway access to the Port of Sagunto or the improvement of the Valencia-Teruel-Zaragoza line, among others.

Thus, for example, the PAV is committed to key infrastructures such as the Cantabrian-Mediterranean Corridor, which is fundamental to favour the work of exporting companies in Aragon, but also to bring the markets of Navarre, La Rioja and the Basque Country closer to the Port of Valencia. The APV is also working, together with ADIF, to promote the first rail motorway linking the port area with Madrid.

Commitment of the shipping companies

CSP Iberian Rail has also added a new link with Lisbon/Leixões, the first to cross the peninsula from coast to coast, furthering its strategy of becoming a global intermodal logistics operator. To this must be added the services it offers with Madrid, Zaragoza and Vitoria. In fact, around ten different railway companies operate in the Valencian area, linking up with the main corridors in Spain: Central, Mediterranean and Cantabrian.