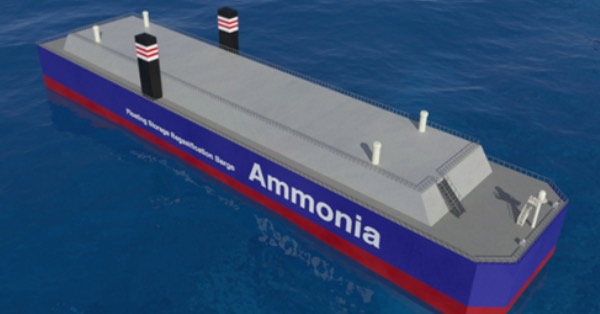 ClassNK has issued an Approval in Principle (AiP) for an ammonia floating storage and regasification barge jointly developed by NYK Line, Nihon Shipyard , and IHI Corporation. This is the world’s first AiP for A-FSRBs handling ammonia as cargo.

Ammonia, which does not emit CO2 during combustion, has attracted attention for its use in thermal power plants and other applications as a potential fuel for decarbonization, while the development of onshore facilities for storage and regasification is a challenge. The A-FSRB jointly developed by NYK Line, NSY, and IHI this time is an offshore floating facility that can receive and store ammonia that has been transported via ship as a liquid, warm and regasify ammonia according to demand, and then send it to a pipeline onshore. According to three companies, the A-FSRB offers the advantages of shorter construction time and lower costs in comparison to the construction of onshore storage tanks and regasification plants. In fact, the A-FSRB is expected to speed up the adoption of fuel ammonia and contribute to its wider use as a lower-environmental-impact next-generation fuel.

ClassNK carried out the design review of the A-FSRB in line with its Part PS of Rules for the Survey and Construction of Steel Ships and Guidelines for Floating Offshore Facilities for LNG/LPG Production, Storage, Offloading and Regasification. Currently, there are no international regulations for floating storage and regasification facilities when the cargo is ammonia, and it is expected that the unique requirements of ammonia will have to be reflected in the design. Therefore, the companies and ClassNK conducted a comprehensive risk identification of various contingencies and worked to identify technical issues from the initial study stage. The risk identification was conducted using the gap analysis method, which identified differences between conventional ships and offshore floating facilities (heavy oil, LNG, etc.) and evaluated the impact of such differences. Based on its review and the risk identification results, ClassNK issued the AiP for the A-FSRB.

Approval in Principle (AiP):
At the initial stage of designing or before the specific target ship to be implemented is decided, the design is examined based on the existing regulations such as international conventions and ship classification rules, and an Approval in Principle (AiP) is issued as proof of conformity with requirements. It also prevents rework of regulatory aspects in the post-process, shortens the examination time at the time of class registration, and can be used as a technical basis for external appeal of the design status.