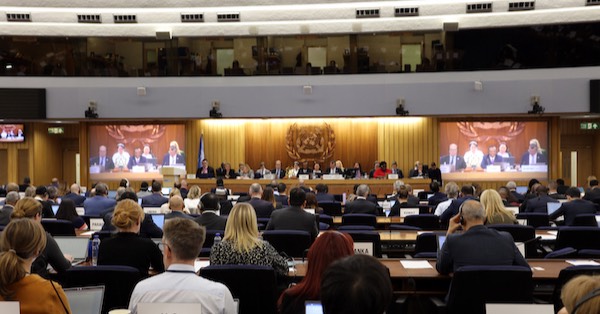 The Marine Environment Protection Committee of the International Maritime organization  has made progress towards revising the Initial IMO GHG Strategy, working towards adopting a strengthened revised Strategy in mid-2023 at MEPC 80.

“I note and welcome the progress made on these matters. It cannot be stressed enough how crucial it is that we keep the momentum and deliver an ambitious and fair, revised IMO GHG Strategy at MEPC 80 next year,” said IMO Secretary-General Kitack Lim, at the close of the MEPC 79 session, which met 12-16 December at IMO Headquarters in London.

“We cannot take our foot off the accelerator, at this moment in time, the cooperation and dialogue that is the trademark of IMO, and not least this Committee, will be more important than ever in delivering on what is expected of us to address climate change, but also biodiversity loss and marine pollution,” said Mr. Lim

The work on revising the IMO GHG Strategy took place in an intersessional group, (ISWG-GHG 13), which met 5-9 December 2022, and in the Working Group on Reduction of GHG Emissions from Ships, which met during the MEPC 79 session.

The Committee reaffirmed its commitment to: adopt a revised IMO GHG Strategy, in all its elements including with a strengthened level of ambition by MEPC 80; continue its work on identifying the candidate GHG reduction measures to be developed in priority as part of a basket of measures consisting of both technical and economic elements by MEPC 80 in accordance with the Work plan; and undertake a comprehensive impact assessment of the basket of candidate measures ahead of their adoption in accordance with the Work plan and the revised Procedure for assessing impacts on States.

MEPC 80 (3-7 July 2023) is expected to adopt the revised IMO Strategy for Reduction of GHG Emissions from Ships.

The revised resolutions are:

The MEPC session adopted amendments to designate the Mediterranean Sea, as a whole, as an Emission Control Area for Sulphur Oxides and Particulate Matter, under MARPOL Annex VI. In such an Emission Control Area, the limit for sulphur in fuel oil used on board ships is 0.10% mass by mass (m/m), while outside these areas the limit is 0.50% m/m. The amendment is expected to enter into force on 1 May 2024, with the new limit taking effect from 1 May 2025.

This move will ensure cleaner air for populations in the Mediterranean Sea area.

The MEPC adopted amendments to MARPOL Annex V to make the Garbage Record Book mandatory also for ships of 100 gross tonnage and above and less than 400 gross tonnage. This extends the requirement for mandatory garbage record books to smaller ships, which will be required to keep records of their garbage handling operations, namely discharges to a reception facility ashore or to other ships, garbage incineration, permitted discharges of garbage into the sea, and accidental or other exceptional discharged or loss of garbage into the sea.

The MEPC adopted amendments to the MARPOL annexes to allow States with ports in the Arctic region to enter into regional arrangements for port reception facilities. The amendments relate to MARPOL Annexes I (oil), II (noxious liquid substances), IV (sewage), V (garbage) and VI (air pollution). The amendments are expected to enter into force on 1 May 2024. Related amendments to the 2012 Guidelines for the development of a regional reception facility plan (resolution MEPC.221(63)) were also agreed.

The MEPC adopted amendments to appendix IX of MARPOL Annex VI on the reporting of mandatory values related to the implementation of the IMO short-term GHG reduction measure, including attained EEXI, CII and rating values to the IMO Ship Fuel Oil Consumption Database (IMO DCS).

The MEPC adopted amendments to appendix V of MARPOL Annex VI, to include flashpoint of fuel oil or a statement that the flashpoint has been measured at or above 70ºC as mandatory information in the bunker delivery note (BDN). The amendments are expected to enter into force on 1 May 2024.

The MEPC agreed in principle to the designation of the Particularly Sensitive Sea Area (PSSA) in the North-West Mediterranean Sea, which will be an important contribution to protecting cetaceans in these waters.