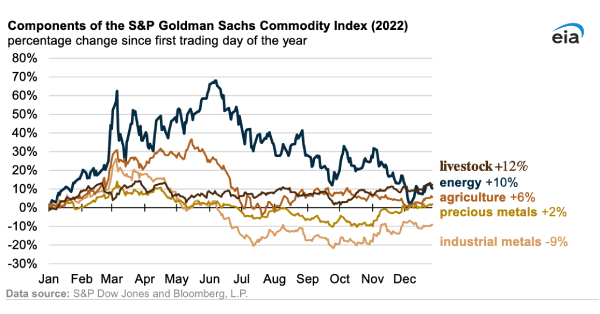 After increasing 68% from January through June, the energy component of the S&P Goldman Sachs Commodity Index (GSCI) ended the year 10% higher than the first trading day of 2022. Global events—notably Russia’s full-scale invasion of Ukraine, which has been ongoing since last February—have contributed to greater volatility in the energy sub-index and higher prices for some energy commodities at the end of 2022.

The S&P GSCI is a weighted average of 24 individual commodity contracts organized into five sub-indexes. The weight assigned to each commodity reflects its significance to the world economy as measured by its production volume and liquidity.

Two major crude oil benchmarks—West Texas Intermediate (WTI) and Brent—account for 70% of the weighting in the energy sub-index. As a result, the energy sub-index tends to follow major price movements in the crude oil market. Crude oil prices rose substantially following Russia’s full-scale invasion of Ukraine and subsequent sanctions placed on Russia. The WTI crude oil price increased to a monthly average of $114 per barrel in June, the highest price in real terms since September 2014. Concerns about the Federal Reserve increasing interest rates and economic slowdown in China caused by COVID-19 mitigation policies contributed to the WTI crude oil price increasing just 3% overall compared with the first trading day of the year.

RBOB increased 5% following changes in crude oil prices. In contrast, ULSD prices increased by 41%, and gasoil prices increased by 36%. A combination of low inventories in the United States and globally, reduced refinery capacity, and disruptions to Russia’s distillate exports caused by sanctions contributed to these price increases.

Natural gas, which accounted for the remaining 6% of the energy sub-index, increased by 20%. Record liquefied natural gas exports to Europe to replace reduced natural gas exports from Russia contributed to the increase, as well as more natural gas consumption for electricity generation. The U.S. benchmark Henry Hub natural gas price increased to average $8.78 per million British thermal units in August, the highest price in real terms since November 2008, before declining through the rest of the year.