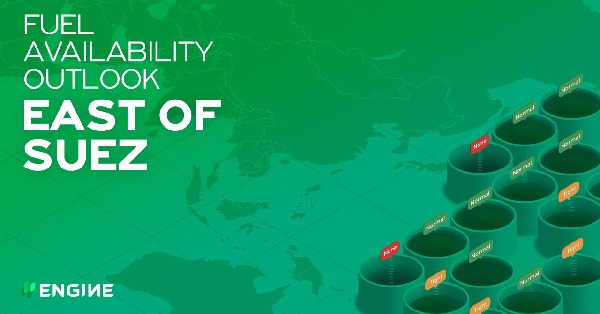 Bunker demand for VLSFO has been average in Singapore coming off the New Year holidays, a source says. Recommended lead times for the grade have come down slightly to 10-12 days now, from two weeks previously.

Meanwhile, recommended lead times for HSFO in Singapore have gone up significantly, from 6-10 days to 12-14 days now.

Singapore’s residual fuel oil stocks averaged 2% higher in December than in November, according to Enterprise Singapore. Singapore’s fuel oil imports and exports both averaged 15% lower in December, with imports notably declining to a seven-month low.

Zhoushan continues to grapple with sluggish demand, a source says. Persistent weather disruptions throughout December contributed to cap bunker demand. Suppliers in the Chinese bunkering hub has been pricing VLSFO at competitive levels to other regional ports to spur demand.

Availability of VLSFO has been getting tighter in Zhoushan as replenishment cargoes have been delayed, a source says. Recommended lead times for VLSFO have increased slightly to around seven days for larger quantities, up from 3-4 days in the prior week. But lead times remain almost steady at 3-5 days for smaller quantities.

The arrival of replenishment cargo last week has eased the tightness for HSFO in Zhoushan, and availability of the grade no longer subject to enquiry. Another replenishment cargo is due for arrival in the second week of January, which is likely to alleviate the situation even further, a source says.

Lead times of around seven days are recommended for HSFO in Zhoushan now. Availability of LSMGO remains okay, with lead times of 3-5 days.

Demand remains very healthy in Hong Kong, and lead times of around seven days are recommended for all grades.

Bad weather is forecast in the South Korean ports of Ulsan, Onsan, Daesan, Taean and Yeosu from Friday onwards, which might disrupt bunkering, a source says.

Availability of VLSFO remains good in Mundra and Kandla on India’s northwest coast, with lead times of 2-3 days advised. Prompt delivery dates for LSMGO are available in Kandla. Bad weather, however, is forecast in Kandla and Sikka over the next few days, which might hamper bunkering in the ports.

Prompt dates are available for both VLSFO and LSMGO in Visakhapatnam on India’s southwestern coast.

Haldia on India’s east coast has good availability of VLSFO, while Paradip has almost run out of the grade.

The Sri Lankan port of Colombo has been grappling with bad weather since the beginning of this week, which has disrupted bunkering in the port’s outer port limits. However, weather has improved, and delivery of stems resumed on Tuesday, a source says.

Recommended lead times across all grades in Colombo are nine days, which is significantly up from four days last week.

Trincomalee, on the northeastern coast of Sri Lanka, has been bearing the brunt of bad weather so far this week. Suppliers have been attempting to make deliveries when the weather permits, a source says.

Good bunker demand in Fujairah since the middle of December, coupled with tight availability, has led suppliers in the port to price its VLSFO at premiums to other major East of Suez ports.

Prompt delivery dates for LSMGO are available in the Omani ports of Duqm, Sohar, Salalah and Muscat.