Cyprus Shipping News
Home World The Port of Valencia will carry out the first hydrogen test for... 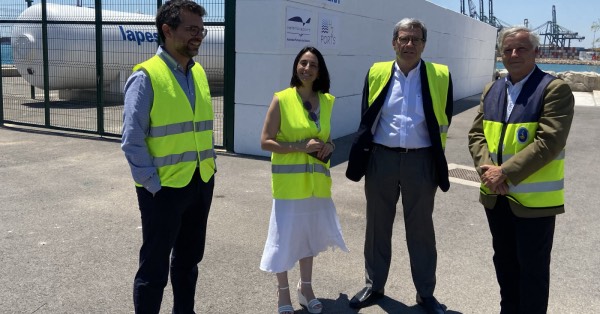 During the month of January, technicians from Valenciaport, the National Hydrogen Centre and Carburos Metálicos are expected to carry out this operation in the hydrogen plant located on the Xità quay

With this initiative, the Port of Valencia is positioned as the pioneering and emblematic port in Europe in the development of hydrogen technologies

Hydrogen is already here. This January will be the month of H2 at Valenciaport. During this first month of the year, hydrogen loading tests will begin to be carried out at the Port of Valencia’s Hydrogen Generator; the supply station for this “fuel of the future” located on the Xità quay.

With the arrival of the new year, the Port of Valencia is once again taking a step forward in its commitment to the fight against climate change and decarbonisation. The technicians from Valeciaport, the National Hydrogen Centre and the company Carburos Metálicos who are taking part in this initiative will supervise this operation which is being carried out for the first time in a Spanish port.

Specifically, throughout the month, different tests will be carried out with materials such as nitrogen, helium and hydrogen to test the elements and mechanisms that make up the hydrogen generator of the Port of Valencia. This loading test will be the starting point for supplying hydrogen to the prototypes of the container stacker and 4×4 tractor unit that will begin operations at the Valencian enclosure this year. With this action, Valencia is positioned as the pioneering and emblematic port in Europe in the development of hydrogen technologies.

The hydrogen supply station (HRS) has been designed and built by the National Hydrogen Centre, and will include a fixed part which will be dedicated to the reception, storage and compression of hydrogen up to delivery pressure (both installed in the Bracet de la Xità or Gità), and a mobile part which will store the compressed hydrogen and include a dispenser of this fuel for refuelling the port machinery. The operating process of a hydrogen station is similar to refuelling conventional vehicles, except that, in this case, the hydrogen is supplied at high pressure.

This refuelling station will supply fuel to the machinery that forms part of the project being developed by Valenciaport. One of this equipment is the prototype of the Reach Stacker vehicle or container stacker that will be powered by this energy and which will be tested at MSC Terminal Valencia. The other piece of equipment will be an adaptation of a conventional 4×4 tractor unit, which will have a fuel cell adapted for testing in loading and unloading operations at Valencia Terminal Europa of the Grimaldi Group. The machinery will arrive during the first quarter of the year and will allow testing the use of hydrogen in the terminals for two years.

This initiative is part of H2Ports -Implementing Fuel Cells and Hydrogen Technologies in Ports-. It is an initiative coordinated by the Valenciaport Foundation in close collaboration with the Port Authority, and is financed by the Clean Hydrogen JU programme of the European Union. Its main objective is to test and validate hydrogen technologies on port machinery that will provide applicable and real solutions without affecting the performance and safety of port operations and producing zero local emissions.

Valenciaport is committed to the fight against climate change and decarbonisation through different actions with the aim of becoming an emissions neutral precinct by 2030. Hydrogen is one of the lines of work being carried out by the Valencia port, which has been recognised by the Spanish Government as a benchmark within the framework of the ‘Hydrogen Roadmap’. In fact, the PAV is participating in various international projects such as H2Ports, of which the hydrogen plant forms part, or Green Cranes, in which the adaptation of cranes to sustainable fuels is being analysed.