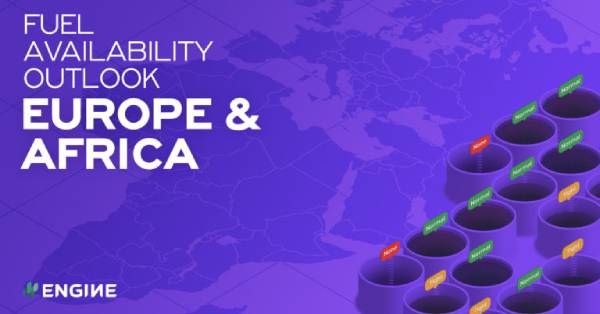 HSFO is tight for prompt bunker delivery dates with several suppliers in the ARA. As last week, around 5-6 days of lead time is generally recommended for good coverage from suppliers. But while bunker schedules are under pressure, there are pockets of prompt availability. At least one supplier has been able to offer the grade for next-day delivery.
VLSFO and LSMGO grades are more readily available in Europe’s main bunkering hub, with around 3-4 days of lead time advised.

The ARA’s independent gasoil stocks have gradually recovered from a trough last summer, and have averaged 6% above November levels in December.
The region’s fuel oil stocks have grown marginally from November, but remain close to their lows from last May. Fuel oil imports are up by a third in December over November levels, helped to some extent by a resumption of inflowing Russian volumes.

Until this month, Vortexa had not registered any Russian fuel oil imports landing in the ARA since August. Before it invaded Ukraine, and European countries and companies responded with sanctions and self-sanctioning, Russia was the ARA’s number one import source for fuel oil. By 5 February next year, all imports of Russian fuel oil, gasoil and other oil products have to be phased out in the ARA and other EU ports.

All fuel grades are available for prompt delivery dates in Hamburg. Fuel oil grades are tight in Bremerhaven, while LSMGO is readily available there, a source says.

Next to no congestion was reported in Gibraltar on Wednesday, with only one vessel waiting for free space to be bunkered, according to port agent MH Bland. All suppliers are on schedule.

Across the bay, in Algeciras, all three suppliers are delayed between 6-18 hours. The port’s Alpha anchorage is especially congested and delays run up to 16-24 hours, MH Bland says.

Meanwhile, bunker operations are running normally in Ceuta. 12 vessels were scheduled to arrive in Ceuta on Wednesday, and two were waiting to bunker there, according to shipping agent Jose Salama & Co. A supplier in Ceuta was running 4-6 hours behind schedule for anchorage deliveries, MH Bland said.

Las Palmas’ outer anchorage has been shut to bunkering for two days this week and could remain closed also on Thursday. High swells and strong winds have complicated deliveries.

Bunker availability is tight for prompt dates off Malta, a source says. Suppliers have increasingly looked towards delivery dates next week for bookings.

Bunkering operations have been stopped at Algoa Bay due to bad weather. 11 vessels are scheduled to arrive this week at the port, according to Rennies Ships Agency. Some of these could be held up waiting if weather conditions remain rough. The weather is forecast to calm down from Saturday.

While bunker deliveries are threatened by unfavourable conditions in Algoa Bay, there are no major issues with bunker fuel supply volumes in either Algoa Bay or Durban. Prompt product is possible to book for delivery in both ports.

Bunkering is going ahead as normal in Mozambique’s Nacala and Maputo ports. Demand has picked up. Three vessels are scheduled to arrive to bunker in Nacala this week, and four in Maputo. That is up from a total of three vessels across the ports last week.