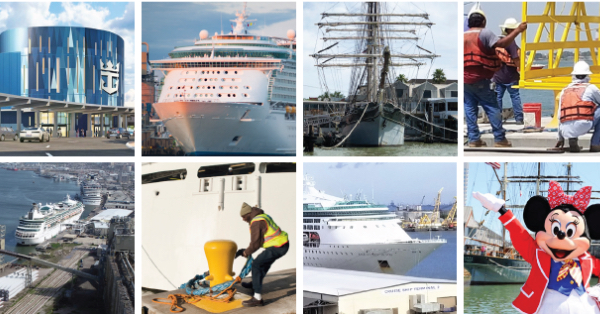 The Port of Galveston, fourth most popular cruise homeport in North America, celebrated its 1-millionth cruise passenger of the year on Dec. 22. Port officials welcomed Kathy Wade and her family at the port’s new Royal Caribbean cruise terminal with gifts before they embarked on their 4-night Adventure of the Seas cruise. The Dallas resident was traveling with her family on a Christmas holiday cruise.

“This is our sixth cruise this year,” Wade said. “We love to cruise and we love Royal! We’ve been on the Adventure of the Seas several times.”

Wade and her family stayed at a Galveston hotel the night before their cruise. To celebrate Christmas on the ship, they were traveling with an inflatable Christmas tree and two bags filled with presents.

Staff from the Port of Galveston, Ceres Terminals Inc. and Adventure of the Seas greeted the family in the terminal to congratulate them.

Rodger Rees, Galveston Wharves port director and CEO, said, “We’re very happy for the Wade family. We’re also happy to mark this milestone for the port and our cruise partners. It shows that cruising from Galveston is back and moving full steam ahead! This is great news for avid cruise travelers like the Wades, for all the local people who work in cruise-related jobs and for the entities that benefit economically. The port’s cruise industry is a major economic engine for our region, benefitting suppliers, maritime services, hotels, restaurants, and shops, to name a few.”

Rees also recognized the onshore services, including the International Longshoremen’s Association, terminal, security and parking staffs who have managed 2 million passenger movements safely and efficiently in 2022.

The port expects to break its 2022 passenger record next year with 362 sailings, a new record in the port’s 22-year history as a cruise homeport. Carnival, Disney, Norwegian, Princess and Royal Caribbean cruise lines are scheduled to sail more than a dozen ships from the Port of Galveston in 2023.

Passengers choose Galveston, the only homeport in Texas, for its convenience and great sailing experience to Western Caribbean destinations, Rees said. More than 30 million people live within a 300-mile radius, making Galveston the prime drive-to cruise market for the central U.S., including Houston, Austin, Fort Worth, Dallas, Oklahoma City and Little Rock.