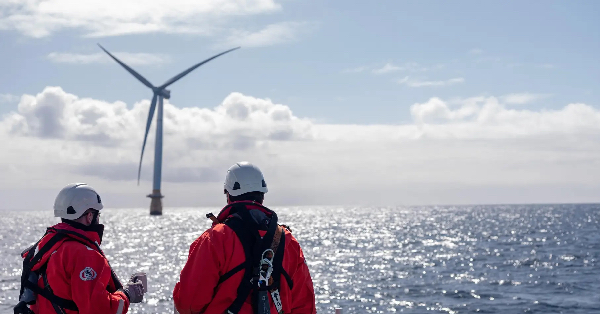 Hywind Scotland, the world’s first floating offshore wind farm, has passed five years in operation since its commissioning in 2017.

Hywind Scotland, located off the coast of Peterhead, Scotland, is the world’s first floating offshore wind farm and the world’s best-performing offshore wind farm, achieving a capacity factor of 54% over its five years of operations. Importantly, Hywind Scotland has run to high safety standards, marking five years of no loss time injuries during its operation.

With a capacity of 30 MW generated by 5 turbines, Hywind Scotland utilises the Hywind floating spar-substructure concept. The wind farm generates enough electricity to power the equivalent of 34,000 UK homes.

Equinor is maturing further opportunities to develop floating offshore wind around the world, as pioneers of the emerging technology, and brings with it the experience gained from Hywind Scotland. Equinor’s next floating wind project, Hywind Tampen, delivered first power earlier this fall and when operational in 2023, Equinor will operate about half of the world’s total capacity of floating wind.

“Operating the Hywind Scotland project for the past five years has informed Equinor of some of the unique challenges associated with a floating wind farm, and the rewards if we get it right. Because of its location and the harsh weather conditions it encounters, Hywind Scotland has exposure to higher wind speeds than we typically see on a fixed-bottom wind farm, but also has to withstand large waves, while continuing to produce power with wave heights of 10 metres. Due to the environment, unique operations and maintenance methods have been required, such as a high-performance crew transfer vessel (CTV) that can continue operations in higher-than-standard transfer conditions.”

“Equinor is the world’s most experienced operator and developer of floating wind, and is taking lessons learned from Hywind Scotland further towards global opportunities. We are advancing plans to develop additional projects, including in South Korea, Australia, France, Spain, California, the UK’s Celtic Sea and Norway. Hywind Scotland provides Equinor with strong confidence in floating offshore wind technology and enables us to advance even-larger projects with a solid operational foundation, getting us closer to the ultimate aim of industrialising and commercialising floating wind.”

In addition to the operational improvements for floating offshore wind, Equinor has been advancing environmental initiatives at the Hywind Scotland project. Equinor is collaborating with Scottish Government Directorate, Marine Scotland, to better understand how fishers can safely operate around and within floating offshore wind farms. Further initiatives include the installation of an autonomous SailBuoy to map fish presence and biomass quantity with acoustic sensors, and testing a new method of analysing environmental DNA (eDNA) at Hywind Scotland.