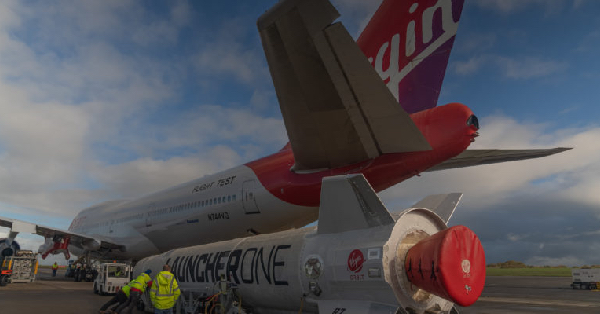 The U.K. Civil Aviation Authority has issued launch and range control licenses to Virgin Orbit to undertake the first satellite launch from UK soil. The granting of these licenses represents a major step forward for the historic Start Me Up mission, and reflects the CAA’s concurrence that all reasonable steps have been taken by Virgin Orbit to ensure the desired safety, security, and environmental stewardship of what is expected to be the first orbital launch ever conducted from western Europe.

Virgin Orbit’s LauncherOne system is currently at Spaceport Cornwall in the U.K. and preparing to roll out to mate to its 747-400 carrier aircraft for final launch rehearsals and, ultimately, for the Start Me Up mission itself. In the past week, Virgin Orbit’s engineering and technician team has re-established and verified the system’s health and readiness for spaceflight. Working with the mission’s payload customers, batteries onboard several satellites were re-charged late last week, keeping the nine satellites on the manifest in good condition to launch to orbit and begin operations.

With these licenses in hand, Virgin Orbit is now working in close collaboration across all mission stakeholders with the aim of opening the first orbital launch window in western European history, targeting a window start date in the coming weeks.

In the words of our CEO, Dan Hart, “receiving Virgin Orbit’s range and launch licenses takes us one step closer to the first satellite launch take-off from U.K. soil. This is a major milestone for the CAA, and represents the successful completion of an enormous effort, which has included the construction of new regulations, new processes, and new teams.

“At this time, all of Virgin Orbit’s systems are green for launch. Our team is laser-focused on execution of final checkouts, launch rehearsal, and ultimately launch, and we will continue working with our friends and partners across agencies and governments to be ready to light this candle once a launch window is finalized.”