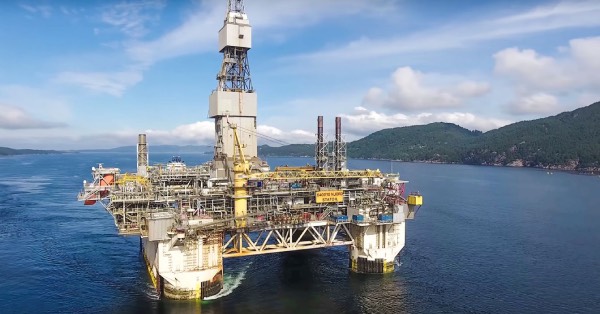 The Njord field has begun producing again after six years, creating a renewed oil and gas hub in the Norwegian Sea and delivering substantial additional volumes to Wintershall Dea.

In a landmark renewal project, both the Njord platform and the field’s Floating Storage and Offloading vessel were towed to shore in 2016 for major upgrades to boost recovery and extend production life. The project ensures the field’s lifetime is double that of the original development plan, as well as providing a focus for tie-ins in the area.

“I could not have asked for better news to close out the year than the Njord gas field restarting production”, said Dawn Summers, Wintershall Dea Chief Operating Officer and Board Member responsible for Norway. “Njord will deliver vital gas volumes to Europe, that are very much needed at the current time. A big thank you to operator Equinor and everyone in the partnership who made this happen”, Summers added.

“The Njord field is a key asset in our portfolio in Norway as it brings us even closer to our production target of 200,000 barrels of oil equivalent per day on the Norwegian shelf. This project ties in closely with our strategy of focusing investment in core areas where we see potential for extra synergies. The return of the Njord field will unlock potential for exploration in the surrounding waters, as well as a hub for tie-back fields already discovered,” said Michael Zechner, Managing Director of Wintershall Dea Norge.

Wintershall Dea is a 50% shareholder of the Equinor-operated field. It also owns 27.5% of the Hyme field which is already tied-in to Njord, and the Bauge field which is poised to start production in the coming weeks.

Njord was originally an oil field, which began production in 1997, with gas exports only starting in 2007. The field was planned to remain in operation until 2013. However, new recoverable volumes in the existing license as well as additional nearby fields gave the facilities a new lease of life, with the Hyme tie-back coming on stream in 2013. The majority of the future production from Njord will be gas.

Both the Njord A platform and the Njord Bravo FSO have undergone extensive upgrades since they were disconnected from the field in 2016. Njord A was upgraded at the Stord yard between Stavanger and Bergen, where it was originally constructed in the 1990s. Njord Bravo was inspected prior to upgrade and prepared for tow-out in Kristiansund, whereas the refurbishment was carried out in Haugesund.

The partnership invested some 2.96 billion Euros (31 billion Norwegian Krone) in the refurbishment project. A new project to partly electrify the field alongside the nearby Draugen platform has been set in motion, which will significantly decrease the CO2 emissions from the field.

Njord is located in the Norwegian Sea, 30 kilometres west of Draugen, and 130 kilometres northwest of Kristiansund. The water depth is 330 metres. Produced oil is transported by pipeline to the Njord Bravo FSO, and onwards by tankers to the market.

Gas is exported through a 40-kilometre pipeline connected to the Åsgard transportation system (ÅTS), and from there to the Kårstø terminal.

The Njord licensees are Wintershall Dea Norge AS (50 percent), Equinor Energy AS (27.5 percent, operator) and Neptune Energy Norge AS (22.5 percent).