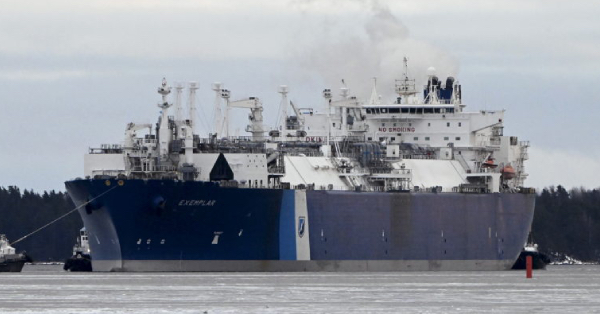 LNG floating terminal vessel Exemplar has today successfully anchored in the deep harbour at Inkoo. Implemented under the leadership of Gasgrid Finland, the LNG floating terminal project will secure the supply of gas to industry, energy production and households as well as safeguard Finland’s security of supply from winter 2023 onwards. The floating terminal vessel turned out to be the fastest and most effective solution to phase out dependency on Russian gas in Finland and to ensure the continuity of gas supplies in Finland in different scenarios far into the future.

The LNG floating terminal vessel Exemplar is 291 m long and 43 m wide, and when fully laden holds around 68,000 tonnes of liquefied natural gas (LNG). The project will also enable gas deliveries to the Baltic states and even to Poland through the Balticconnector pipeline. Gasgrid has leased Exemplar for 10 years at a total cost of €460 million.

“It is really great that the LNG floating terminal has now safely anchored in the deep harbour in Inkoo. Under Gasgrid’s leadership, the project has progressed incredibly efficiently with Finnish decision-makers and various authorities. The LNG floating terminal project is an excellent example of how seamless teamwork between different parties works in Finland at its best. I would like to thank all the professionals and decision-makers involved in the project,” says Olli Sipilä, Gasgrid Finland’s CEO.

“The LNG floating terminal project is highly important for Finnish society as a whole and today we are making Finnish economic history in many ways. Finland will permanently phase out its dependency on Russian gas and will greatly improve the Finland’s security of supply. This is the first time ever that an LNG floating terminal has brought liquefied national gas to Finland,” says Sipilä. ”The aim is that the terminal’s customers will begin to distribute gas to meet the needs of Finnish industry, energy production and households from mid-January 2023 onwards.”

The structural strength and tensile strength of Exemplar’s pier and mooring structures are many times those used for normal shipping operations. In addition, a 2.2-km connecting gas pipeline has been built under Gasgrid’s leadership to the gas transmission network. The LNG will undergo regasification aboard the vessel before being transferred via the loading arm to Gasgrid’s gas network.

”We started the building work required by the LNG floating terminal in August 2022. The contract work included the pier and mooring structures and systems required by the floating storage and regasification unit (FSRU) and construction of the gas pipeline. Following successful berthing, we will make a start on carrying out various measures and testing related to the actual use of the liquefied natural gas aboard the vessel and the integration of the LNG floating terminal to Gasgrid’s gas network. Working together means we have kept both to plan and the tight timetable,” says Esa Hallivuori, Head of the LNG Floating Terminal Project at Gasgrid Finland.