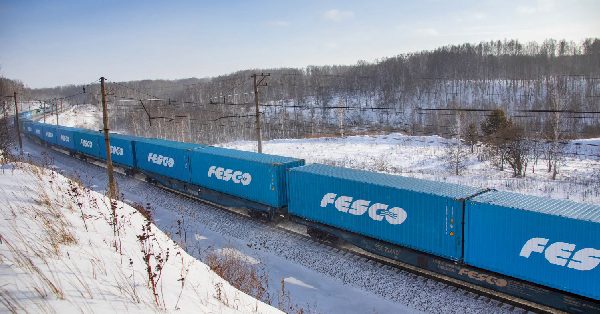 As part of expansion of its own network of routes FESCO Transportation Group (“FESCO”, the “Group”) organized a new intermodal service from China, the Republic of Korea and Japan to Moscow via port Nakhodka.

The service includes delivery of cargo by regular sea lines of the Group to Nakhodka Sea Fishing Port from Korean ports Busan and Incheon as well as from Chinese ports Shanghai, Ningbo, Qingdao and Xingang with transshipment in Busan. In addition the service covers Japanese ports Hakata, Kobe, Nagoya, Toyama, Shimizu, Yokohama. Regularity of ship calls is twice a month. The basis of cargo flow of the service are consumer goods, electronics, construction materials and other goods. After processing in port the cargo is dispatched to Moscow by rail.

Within the framework of the new service the first train left Nakhodka on December 18. 49 forty-foot containers with imported goods of various nomenclature which arrived on vessel FESCO Yanina to Nakhodka Sea Fishing Port were loaded into gondola cars and left from port station Rybniki to station Formachevo, Chelyabinsk region. There the containers will be reloaded to fitting platforms and will proceed to station Silikatnaya in Moscow as part of a single end-to-end service. Planned date of arrival of the train is January 1-2.