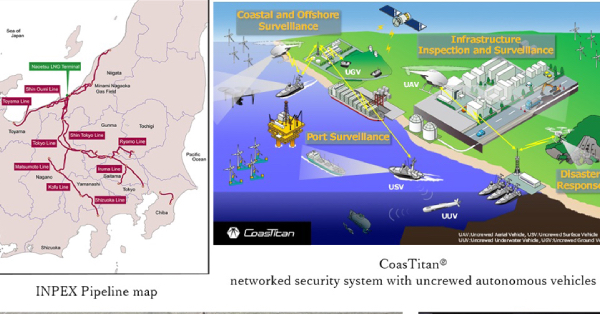 INPEX’s domestic natural gas business is supported by infrastructure including a natural gas trunk pipeline network extending more than 1,500 kilometers. A large portion of this network runs underground beneath public roadways, and unreported roadworks could cause roadwork accidents such as pipeline ruptures or gas leaks. Accordingly, INPEX PL uses motor vehicles to regularly patrol roadways along the pipeline routes to locate unreported roadwork activities before they occur or as early as possible. The use of drones is expected to increase the frequency of patrols and further minimize the risk of roadwork accidents, which will help ensure safe and reliable gas supply to customers. Replacing vehicles with drones would also eliminate the heightened risk of traffic accidents involving patrol officers resulting from extended driving.

MHI and INPEX concluded a memorandum of understanding in 2016 to jointly study solutions to technological challenges in the energy sector. Since fiscal 2020, the two companies have been jointly considering ways to automate pipeline patrols using drones, including conducting test flights with drones. This has involved applying the CoasTitan® networked security system with uncrewed autonomous vehicles developed by MHI’s Integrated Defense & Space Systems segment, in combination with an AI-based automatic system discerning road conditions newly developed by MHIMT, as an alternative to the current visual verifications conducted through motor vehicle patrols.

The demonstration test was carried out in anticipation of the enactment of the revised Civil Aeronautics Act, which prescribes Category III(Note1) drone flight requirements from Japan’s Ministry of Land, Infrastructure, Transport and Tourism (MLIT). The test confirmed safe, long-distance autonomous flight, which under Category II(Note2) conditions is a requirement for an alternative system. The test also confirmed the feasibility of assessing road conditions in real time using a drone equipped with a camera linked with AI technology discerning objects automatically. The test was conducted as part of a joint research project with the Japan Organization for Metals and Energy Security (JOGMEC).

The four-company consortium will further conduct long-distance autonomous flights, improve the precision of the AI-based object discernment system, and consider measures for safe flight operations, with the aim of implementing automated drone pipeline patrols at an early stage. The consortium will also continue to consider broader applications of the system, including surveying the status of areas along the pipeline routes during natural disasters at the request of local governments.