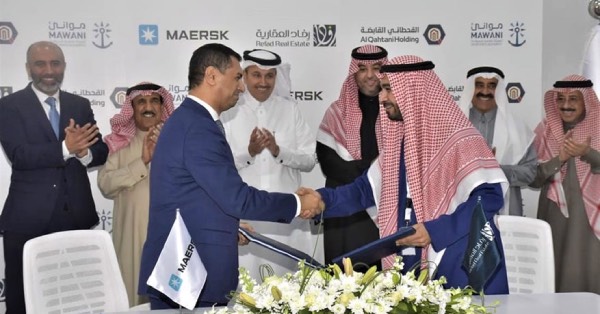 A. P. Moller – Maersk , a global integrator of container logistics, today signed an agreement with Refad Real Estate to operate a brand new Cold Storage facility at King Abdulaziz Port in Dammam, Saudi Arabia. Maersk will open the doors to the facility in March 2023 for its customers.

The agreement was signed in the presence of His Excellency the Minister of Transport and Logistics, Chairman of the Board of Directors of the Authority, Engineer Saleh bin Nasser Al-Jasser, His Excellency the President of the Saudi Ports Authority, Mr Omar bin Tala Hariri, Mohammad Shihab, Managing Director, Maersk Saudi Arabia and the Chairman of the Board of Al Qahtani Holding, Sheikh Abdulaziz Abdelhadi Al-Qahtani. The agreement was signed by Group Director of Real Estate, Mr Abdelhadi Abdulaziz Al Qahtani of Refad Real Estate and the Director of Products and Services, Maersk Saudi Arabia, Mohamed Sedeek Hashish.

“Saudi Arabia is a significant market for us. With more than a fifth of the country’s food imports coming through King Abdulaziz Port in Dammam, we wanted to establish a state-of-the-art cold storage facility that will help us serve the food industry better”, said Mr Mohammad Shihab during the signing ceremony. He added,

Our ambition is to connect and simplify our customers’ supply chains. To achieve this, we must be close to our customers, collaborate with trusted and reliable partners and build a network that truly enables global trade. With our new facility in Dammam, we are setting ourselves up to achieve all three goals.

Dammam enjoys a strategic location in more than one way. Several food processing manufacturers in the different industrial zones and residential communities are based around King Abdulaziz Port in Dammam. This means that there is manufacturing as well as consumption of food items in and around Dammam. Moreover, Dammam lies in close proximity to neighbouring Gulf countries like the UAE, Kuwait, Bahrain and Qatar, making it a significantly important distribution hub for several markets. On the other side, King Abdulaziz Port is also strongly connected to the hinterland through a robust road and rail network, making it the location of choice for many.

Maersk’s Cold Storage facility at King Abdulaziz Port in Dammam will primarily serve the requirement to store frozen commodities such as poultry, meat, vegetables, confectionary and processed food. The facility will also house chilled cargo such as dairy products and seasonal fruits. To ensure top-notch quality of service, the facility will be equipped with world-class standards when it comes to temperature and humidity control. This will help ensure minimum to no food wastage during its storage at the facility. The customers will also get complete visibility on these parameters, thus creating transparent and trusted operations.

Sustainability at the core

ESG, especially decarbonisation, is at the core of every decision Maersk takes. In line with that, several considerations have been made to ensure that greenhouse gas emissions are kept to a minimum through various actions such as: