Cyprus Shipping News
Home Offshore Energy Niedersachsen Ports together with Uniper and TES give the starting signal for... 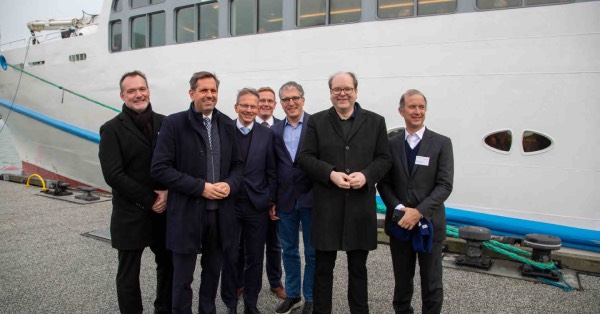 Uniper, a leading German energy supply company, pioneer in the field of green gases and Germany’s largest gas supplier with over 1000 customers and TES, a global green energy company with the aim of assisting Europe and its leading industrial companies transition to net-zero by delivering affordable and renewable eNG, are pleased to announce the cooperation with Niedersachsen Ports (NPorts), the largest operator of public seaports in Germany and a company of the state of Lower Saxony.

On the sidelines of the opening ceremony for the first German LNG terminal in Wilhelmshaven, the three companies signed an agreement in the presence of State Minister for Economic Affairs Olaf Lies and State Minister for the Environment Christian Meyer. It provides for the planning of a new large joint import terminal with up to 6 berths for TES and for Uniper. In parallel, Uniper will conduct technical studies that should enable Uniper to import around 2.6 million tons of green ammonia per year. This capacity plus the 1-GW electrolysis plant for hydrogen production planned as part of the Uniper Green Wilhelmshaven project could supply around 300,000 metric tons of green hydrogen, equivalent to 10-20% of the demand expected for 2030 throughout Germany. TES plans to take FID in 2023, with the goal of starting the first phase of the largest import terminal in Europe in 2026. The terminal is expected to have a capacity of 20 million tons of LNG and eNG. TES aims to begin importing the first eNG by the end of 2025 or early 2026, and to increase capacity to 5 million tons by 2030.

This new jetty in front of the Voslapper Groden will probably require investment funds of approx. 500 million euros, the financing still has to be clarified. This investment in the necessary infrastructure for a CO2-free hydrogen economy and the planned import projects for green and decarbonized gases will make Wilhelmshaven the largest energy hub in Germany and will supply green energy as hydrogen for Germany as a business location in the future.

This will accelerate the development of a green import infrastructure that will enable a shift away from fossil fuel imports.

Olaf Lies, Minister for Economics, Labour and Transport of Lower Saxony said: “Lower Saxony is an energy hub for and will remain so in the future. Starting as early as 2026, we will develop the site of Wilhelmshaven as one of the central gates for green and clean energy for Germany. Only with additional terminals will we be able to continue to guarantee Germany’s energy supply security. So, with this project, TES and Uniper are making a significant contribution to Germany’s energy transition. We want to maintain the pace presented by Uniper, OGE and our approval authorities at the first LNG terminal for further projects – that is what we call the ‘Neue Deutschlandgeschwindigkeit’.”

Christian Meyer, Minister for Environment of Lower Saxony, said: “I am very pleased that TES, Uniper and NPorts are planning and building a new jetty for the landing of regeneratively generated “green gases”. This investment makes Wilhelmshaven the most important hub for climate-neutral gases in Germany. Now it’s time to take the momentum from the construction of the pier at the UVG bridge for the “Esperanza” project to achieve climate neutrality as quickly as possible. Because we cannot and do not want to make any compromises when it comes to climate protection, we have no more time to lose.”

Marco Alverà, CEO of TES, said: ” We are thrilled to announce our partnership with Uniper and NPorts to speed up the development of our Green Energy Hub. By converting sun and wind into sustainable eNG (electric natural gas) through the combination of green hydrogen and circular CO2, and utilizing existing infrastructure, we will be able to deliver green, secure energy to leading European industrial companies. This will not only assist these companies in their transition to green energies, but also allow them to maintain competitiveness while significantly reducing carbon emissions.”