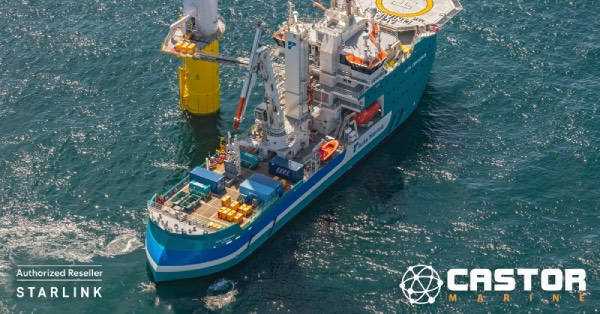 Low Earth Orbit (LEO) satellite communications at sea is becoming increasingly important, because of its ability to provide high-speed Internet at very low latency. With this project Castor Marine’s strategy to offer Starlink to its portfolio is already paying off. The W2W vessels will each get four Starlink antennas and the full Fortinet suite for secure SD-WAN and SD-LAN network connectivity. This means that onboard operational and Crew Internet traffic is secure and fast, i.e., a download speed of more than 500 Mbps.

Castor Marine already serves Acta Marine’s fleet of offshore and DP2 workboats with VSAT and Iridium Certus services and recently installed the new Internet security infrastructure as well. This is important, as good communications between all parties involved in an installation or maintenance project is the basis of successful and safe offshore operations. This goes especially for Acta Marine’s fleet and crew who’s combined capabilities mean that work can be performed around the clock in harsh offshore conditions.

According to Vince van den Belt, Manager IT at Acta Marine, the contract is a result of the way both companies work together: “We have found a reliable partner in Castor Marine thanks to their extensive technological expertise and driven team. Therefore, it was logical to have them integrate Starlink on our offshore wind fleet.”

Mark Olthuis, director at Castor Marine, adds: “We have been working for and with Acta Marine for more than five years and this project is a confirmation of our continued partnership. That makes me grateful and happy, as that is what motivates us. Castor Marine aims to provide the best connectivity solution for Acta Marine and this is the right moment to implement Starlink as part of mix for the Acta fleet.

“One of the elements we very much appreciate in the relationship with Acta Marine, is that from our perspective, Acta is a very forward-looking company, commercially and technologically. As to their fleet connectivity, Acta management wants the Crew to feel at home on board. The fact that they now have much faster Internet connection, allowing the Crew to stream videos or facetime with their families and friends, was one of the considerations for installing Starlink,” says Mark Olthuis.

In addition, the moment a vessel has access to a higher bandwidth, a new range of operational capabilities becomes available. It’s possible to execute more remote operations simultaneously, deploy and monitor more subsea cameras, VR- and AR-enabled technologies come into view and controlling all remote assets becomes much easier. Mark continues: “Acta’s specialists have really asked themselves the question ‘What can we do with better connectivity? What does it mean? Does it provide us with an extra advantage for our customers, Walk-to-Work fleet and projects? We spoke extensively about this and when it turned out the answer was ‘yes’, they took action.”

The ‘low latency’ of the LEO satellite network of Starlink shortens the delay in vessel-to-shore communications considerably. This means better accuracy and reduced chances on misunderstandings when executing complicated offshore projects, real-time two-way communications comparable to a fiber connection in an office in fact. The Starlink system also enables the use of real-time applications, which means operators can expand their service portfolio. The expanded connectivity suite that Castor Marine now offers creates a seamless user experience that was impossible a few months ago.

In fact, Ivo Veldkamp, Castor Marine’s CEO, expects Starlink to “become the dominant connectivity technology onboard merchant ships, offshore vessels and yachts. Ships that currently rely on VSAT will add Starlink for high bandwidth and speed, while continuing to use VSAT as a back-up and failover service. Castor Marine is well-positioned to meet this demand.”