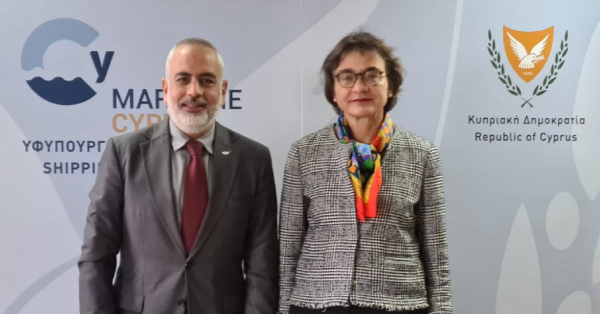 Welcoming the Ambassador, the Deputy Minister expressed his satisfaction for the excellent cooperation between Cyprus and Germany, underlining his will to further deepen the close relations maintained by the two countries, especially in the shipping sector.

The Deputy Minister informed the German Ambassador about the positions of Cyprus in relation to the EU sanctions against Russia, in particular about the need to have a strong implementation framework that will make the sanctions more effective, maintaining as far as possible the competitiveness of European Shipping. In this direction, Mr. Demetriades developed the proposal of Cyprus to promote supporting measures for European Shipping, which was adopted by the European Commission.

Subsequently, the Deputy Minister informed the Ambassador about the results of his recent visit to Hamburg. The two sides exchanged views on matters concerning the decarbonisation of shipping and agreed on the need for further cooperation within the framework of the joint participation of the two countries in the European Union and the International Maritime Organization