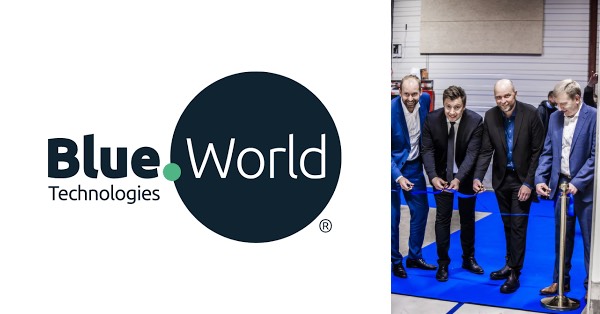 The developer and manufacturer of methanol fuel cells takes its production to a new level with series production. All production lines for the core fuel cell components have been established and run in, allowing lower production costs and higher speed while increasing production quality

The Danish fuel cell developer and manufacturer Blue World Technologies started the series production of its methanol fuel cells yesterday which was marked with the official inauguration of the 8,500 m2 Blue Aalborg Factory. The fuel cell factory, which initially has an annual production capacity of 250,000 individual fuel cells, is located in an industrial area at the Port of Aalborg in Denmark. The production capacity corresponds to a total output of 15 megawatts, which is expected to be expanded to 50 megawatts in the next few years. Over time, the production capacity can be expanded to 500 MW on the existing site. The fuel cells of the company will primarily be used for stationary power generation and within the maritime sector and are a climate-friendly alternative to conventional fossil-based combustion engines. The high electrical efficiency of the fuel cell systems will enable efficient use of e-fuels, such as methanol, that through power-to-x can be manufactured as a renewable fuel ensuring a net-zero operation.

When Blue World Technologies was founded in 2018 it was with a strong determination to industrialise the methanol fuel cells bringing the technology from laboratory production to large-scale production. Over the course of the past four years, the company has developed new production processes and equipment and has established a state-of-the-art fuel cell factory securing in-house production of all core components of the fuel cell stack. Besides the production of the core fuel cell components; membrane, electrode, and separator plates, the factory holds the assembly of the MEA (membrane electrode assembly), fuel cell stack, and methanol-reformer as well as system assembly of fuel cell systems for stationary power generation.

Throughout the development and establishment of the factory, the focus has been on lowering production costs and time while ensuring high-quality components. An example of this is the separator plates, where the company has succeeded in reducing the production time of the plates by ten times with a potential for further reduction in cost and time.

“With the start of series production, we have achieved our biggest milestone to date and are one step closer to replacing conventional combustion engines with our climate-friendly fuel cell technology,”says Anders Korsgaard, Co-founder and Chief Executive Officer at Blue World Technologies. “The high energy efficiency of the methanol fuel cell enables competitive use of e-fuels, which still has a green premium compared to fossil fuels. We are thus making an active contribution to the green transition.”

Customers, shareholders, and partners from around the world participated in the official inauguration of the factory marking the start of series production.