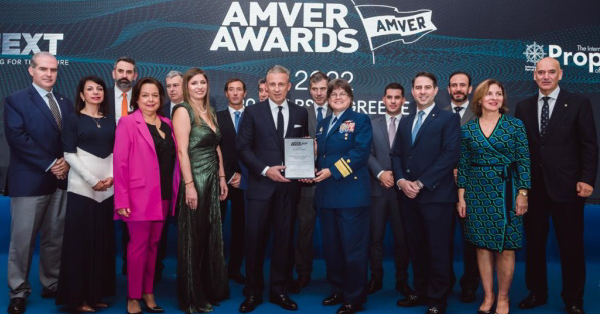 Hundreds of Greek shipping companies were recognized for their participation at the AMVER program last year, during the 30th anniversary of the Greek AMVER Awards Gala Dinner, which took place last night at the Athenaeum Intercontinental Hotel.

Held in the presence of Greek government officials, top US diplomats and senior representatives from nearly the entire Greek maritime community, the event was organized by the International Propeller Club of the United States, Port of Piraeus, in collaboration with the U.S. Embassy in Greece and the United States Coast Guard.

The AMVER System (Automated Mutual Assistance Vessel Rescue) monitors ships, identifies possible problems and informs ships in the vicinity to approach and provide assistance. It officially came to life on 15 April 1958 through the efforts of the United States Coast Guard and a number of commercial shipping representatives. Over 7,000 lives have been saved by AMVER-participating ships since 2000 and many of them owe their lives to the selfless and altruistic efforts of seamen and vessels of Greek interests. Over 11,000 international ships participate in AMVER and an average of 6,300 ships are added on the AMVER plot each day. The AMVER Center computer receives over 40,000 AMVER messages a day.

“Tonight is a very special night, since this year the AMVER awards event completes 30 years in Greece. This is a particularly important anniversary for Greek Shipping”, said Frangoulis, in front of 950 guests who had the opportunity to network and enjoy an entertaining evening full of camaraderie and inspiration.

Frangoulis added: “As every year, tonight we honor our seafaring heroes who, with self-sacrifice and self-denial, hurry to save lives in the seas of the world, defying all danger. We honor the ships and their management companies. We honor all of you who are at the helm of decisions and support this very important US Coast Guard program that began in 1958 in the North Atlantic and has expanded worldwide since 1971. A program that since 2000 has helped save 7,000 lives”.

Representing the Greek government, Deputy Minister of Maritime Affairs & Insular Policy, Kostas Katsafados, said: “As you know Greece and Shipping are inextricably linked with each other. This is the reason why Greek Shipping remains firmly as a leading force in World shipping. In particular, it controls 32% of the world’s tanker fleet, 25% of dry bulk carriers and 22% of the liquefied natural gas (LNG) fleet.

“According to the latest European Union (EU), Commission report, Greece continues to increase its share of the fleet controlled by the EU while at the same time the Greek-owned fleet is the largest cross-border carrier in the world with more than 98 percent of cargo transported between third countries. Greek shipowners own 59% of the EU’s tonnage. More than a third of the Greek-owned fleet, or 1,706 ships, are flagged by an EU member state, while they continue to invest in newbuilds.

“I am mentioning numbers, but behind the numbers there are people. And the human potential of our shipping industry is the strong asset of our country. That is why I think that systems like AMVER, which in the last 22 years has helped to save more than 7000 lives, show its usefulness. But they also confirm something else: The dynamics of a word that does not exist in other vocabularies. The word “filotimo”. And the Greek seamen and the companies behind them, whom we honor today, honor “filotimo” by participating with their ships in the efforts to save lives”.

Mary Olson, Deputy Chief of Mission of US Embassy in Greece, delivered a speech on behalf of His Excellency George James Tsunis, US Ambassador to Greece and honorary member of the International Propeller Club, Port of Piraeus. Mrs Olson reiterated the significance of the AMVER Awards and emphasised the importance of the Hellenic-American relationship.

“AMVER has saved thousands of lives at sea. While it began as a U.S. Coast Guard initiative, the wholehearted embrace from the merchant shipping industry around the world has made the program a global success.

“I want to recognize the entire Greek shipping community for your friendship. And I recognize that your participation in the AMVER program is only one aspect of Greek shipping’s longstanding and deep ties to America.

“Last week, a team from the U.S. International Development Finance Corporation visited Greece to continue conversations with American company ONEX regarding U.S. government support for the renovation of the Elefsina Shipyard. A successful investment in the Elefsina Shipyard will be an asset not only to the Greek shipping community, but also for the U.S.-Greece trade and investment relationship”.

A video was projected with all the Greek companies which were honored with this year’s AMVER Awards.

Prior to her welcoming remarks, Rear Admiral Laura M. Dickey, honored the Propeller Club, Port of Piraeus for successfully promoting the AMVER Program and organizing the Greek Awards annually for 30 years.

Later, during her address, the Admiral said: “I am impressed with the work you are doing to promote shipping. This year marks the 30th anniversary of AMVER Awards in Greece, And with Greece’s rich history of leading the way in the AMVER program, I can think of no better place than to be here tonight to recognize those vessels that regularly participate in the AMVER system. Greek shipowners own nearly 21% of global tonnage. You not only dominate the world as the number one seafaring country, you also lead the world in readiness to save life at sea and this is a testament to Greece’s steadfast dedication to safety at sea and their fellow mariners.”

At the end of her speech Laura M. Dickey received an award from Danae Bezantakou, General Secretary of the Propeller Club of Piraeus, for her contribution to the AMVER System.

Fourteen Propeller Club and Greek shipping industry representatives shared their views and impressions about the Propeller Club during a video reminiscing about the humble beginnings of the award scheme and sharing personal stories about the history of AMVER Awards, ranging from the first AMVER Awards during Posidonia in the early 90’s, the increase of Greek recipients from 45 in 1992 to this year’s record of 247, the initiative’s values of courage, filotimo and humanity, as well as to real rescue stories, such as one about 120 people saved near Libya’s coast by a Greek vessel. The video featured the thoughts of Stefanos Costopoulos, Gregory Timagenis, Costas Constantinou, George Xiradakis, Nicky Papadakis, Markos Foros, Vlassis Katrantzos,Antonis Faraklas, Kostas Rokkos, Marios Kyriakou, Theodore Kontes, Nikos Tsavliris, Dimitri Fafalios, Costis Frangoulis.

The event continued with the awarding ceremony.

Thomais Apergi and Locomondo provided the musical entertainment in an evening that brought the Greek maritime community together to celebrate its contribution to safety at seas worldwide.

The AMVER Awards 2022 event was held with the support of The Ministry of Maritime Affairs and Insular Policy, the Union of Greek Shipowners and the Hellenic Chamber of Shipping.

The idea for the Propeller Club was conceived in New York in 1922 by a group of professionals engaged in the merchant marine industry. They would meet regularly to discuss issues of mutual interest and concern. These meetings led to the foundation of the Propeller Club of the United States, with the aim of promoting the US merchant marine industry and international shipping to create a better world through sea commerce. The name “Propeller” is symbolic of propulsion, the driving force required to achieve the Club’s objectives. The Propeller Club’s world headquarters is located in Fairfax, Virginia, and today there are Clubs in 72 ports worldwide.

The International Propeller Club of the United States, Port of Piraeus is a non-profit association and is one of the oldest maritime institutions in Greece. Founded in 1935, it is the largest and most powerful Propeller Club among a network of 72 counterparts worldwide. Its main purposes are the promotion, advancement and support of global merchant shipping and Greek-American relations at a social, cultural and business level, while it also carries out a significant social service towards the Greek society with donations and the provision of scholarships to distinguished students in Greek and American universities.

The need for the AMVER System became apparent during the Titanic disaster in 1912. As the distress flares from the Titanic brightened the sky, passing ships considered them part of the onboard celebrations. Little did they know that the ship had just hit an iceberg.

This highlighted the need to monitor ships, identify possible problems and to call on ships in the vicinity to assist. But this was an idea which only became a reality with the help of computer technology. The AMVER System (Automated Mutual Assistance Vessel Rescue) monitors ships, identifies possible problems and informs ships in the vicinity to approach and provide assistance. It officially came to life on 15 April 1958 through the efforts of the United States Coast Guard and a number of commercial shipping representatives.
Originally known as the (AMVER) System, it became operational on 18 July 1958.