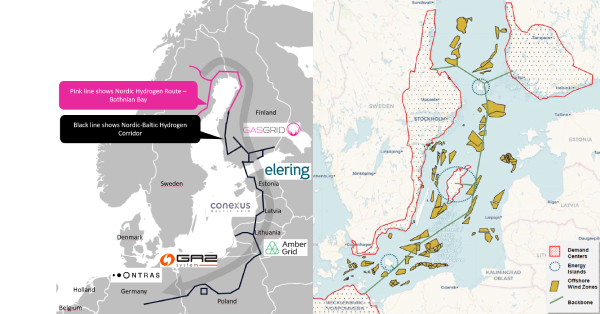 The EU member states are currently in the process of dynamic changes related to the energy transformation and the decarbonisation of the European economy. Hydrogen is expected to be one of the key fuels in the EU’s energy transformation. Now, the gas transmission systems operators (TSOs) are moving in good collaboration from European Hydrogen Backbone (EHB) vision to action. On December 14, 2022 TSOs from six EU countries signed a cooperation agreement on a cross border project, Nordic-Baltic Hydrogen Corridor.

Nordic-Baltic Hydrogen Corridor supports diversification of energy supplies, and accelerated roll-out of renewable energy allowing in particular for achieving the EU target of 10 million tonnes of domestic renewable hydrogen production by 2030. The corridor can transport green hydrogen produced in the Baltic Sea area to supply consumption points and industrial clusters along the whole corridor, as well as in central Europe.

In addition, when the hydrogen infrastructure develops further around the Baltic Sea, a strong market for hydrogen can be created enabling access to abundantly available and competitive renewable energy resources.

The project strongly supports EU hydrogen strategy and REPowerEU plan. In addition, the Nordic-Baltic Hydrogen Corridor will support several regional and EU climate targets, such as the EU Green Deal, Fit for 55 package.

Based on the pre-feasibility study recommendations, a decision on continuation of the project development would be made. Following phases in the project would include engineering and permitting phase, construction and commissioning.

There is a significant potential for production and use of hydrogen in countries surrounding the Baltic Sea as well as for developing offshore wind and hydrogen production. The Baltic Sea region has excellent conditions for the production of onshore and offshore wind energy. With strategic investments in the infrastructure, renewable energy, and hydrogen production, up to 55% of the clean hydrogen target defined in the REPowerEU Plan can be produced in the region simultaneously supporting innovative decarbonization projects within each country as well as helping the EU to meet its overall goals.

In the energy field and in response to Russian aggression, the prime ministers of eight states surrounding the Baltic Sea signed The Marienborg Declaration in August 2022. The declaration includes high-level political commitment to explore joint cross-border renewable energy projects and identify infrastructure needs. Therefore, they set combined ambitions for offshore wind in the Baltic Sea region of at least 19.6 GW by 2030. The Marienborg Declaration recognizes substantial potential for offshore wind power in the Baltic Sea basin, reaching up to 93 GW.

The European Hydrogen Backbone (EHB) initiative aims to accelerate Europe’s decarbonisation journey by defining the critical role of hydrogen infrastructure – based on existing and new pipelines – in enabling the development of a competitive, liquid, pan-European renewable, and low-carbon hydrogen market. Development of hydrogen infrastructure will be a prerequisite for renewable hydrogen market creation and market integration. Therefore, Finnish and Swedish gas transmission system operators (TSOs) Gasgrid Finland and Nordion Energi have, together with industry companies OX2 and Copenhagen Infrastructure Partners, launched a project called the Baltic Sea Hydrogen Collector (BHC).

BHC is an offshore pipeline project that will connect mainland Finland and Sweden with Finnish Åland island and Germany by 2030. The offshore project may also be connected to other energy islands in the region such as Gotland and Bornholm in Sweden and Denmark.

The aim of the Baltic Sea Hydrogen Collector is to unlock the significant offshore wind potential, in Bothnia Bay and Baltic Sea region, creating a booming hydrogen market and connecting both supply and demand.

BHC has a critical role in creating an efficient, harmonised, and integrated hydrogen market in Europe. It offers solutions to the collection, storage, and transportation of green H2, providing market integration and a solution to maintain balance in the energy system. It enables making the offshore wind energy in the region a secure and flexible energy source, increasing system resilience, energy independence, and security of supply. It will also support decarbonization of hard-to-abate sectors and green industrialization in the Nordics, Baltics, and Central Europe.

By creating a guaranteed route from production to use, the Baltic Sea Hydrogen Collector provides confidence to green H2 producers and users to invest in the new hydrogen value chains and partake in supplying the rising green H2 demand in Europe.